The Spell of The Sensuous (Chorleywood to Chesham Walk) Reflections on the Death of a Porcupine by D.H. Lawrence

This post is part of a series of reflections/walks/land art pieces which I’m filing here and on Instagram as a project under the title Spell of The Sensuous. Route info & GPX for the walk itself can be found here. 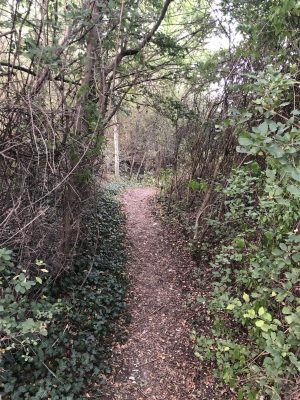 Just past Willow Farm, heading toward the Harlington Mill Nurseries, a woman strides towards me with her with her shaggy, long-haired German Shepherd. She too is somewhat shaggy looking: deeply tanned, blunt featured, piercing blue eyes. She asks me if the footpaths and bridleways have been comfortable to pass through, not too snaggy with brambles and nettles. I see the blades of some long-handled pruning shears poking out of her rucksack.

On this Sunday afternoon when lots of people are in the pubs of Harlington watching the football, or at home, she is out clearing country paths for Max and I.

I thank her for doing this, and as I walk away, but only later recognising how deep that gratitude runs. This unnamed human creature is a Path-Clearer. I think of everyone involved in the conservation, preservation, and repair of these routes I use to walk through the countryside. It is valuable work.

It’s not a catchphrase most people on this island would recognise, coming as it does from a series of skits created by Nick Kroll and John Mulaney in a Comedy Central Series that ran from 2013-2015. I have just discovered the Kroll Show via a recommendation from Stephen Metcalf of The Culture Gabfest, and all thirty episodes have been a near-constant delight.

The Oh, Hello segments, where Kroll plays the 70-something Gil Faizon, and Mulaney, his sidekick George St. Geegland make me feel gleefully happy. Everyone bangs on about how Mulaney is the genius of this comedy duo, but I think Kroll is a particular kind of genius too. I get the sense that one aspect of his genius is to be a path-clearer, to not get in the way of other comedians, to enjoy their spotlight when they’re basking in it too.

Their Too Much Tuna skits are the acme of their genius. When writing this, I thought I might spell out why the two minute sketch below is not only hilarious but profoundly symbolic and symptomatic of our current cultural and political climate, but then I realised I could save myself the work of doing that by just playing the thing to you.

Feel free to email though if you need a breakdown, though I fear it might kill some of the joy of just vibing with the piece. And if you don’t just-vibe with it, my longwinded explanation probably wouldn’t amplify that for you anyway.

They say that if you have an earworm, you should sing the whole song from start to finish as it’s the subconscious mind’s way of trying to remember or hold onto the rest of the song. Not sure if that’s the case, but what do you do with a thoughtworm? Or in this case: a kind of comic meme? In the last few weeks Faizon & Geegland’s Oh, Hello has been playing in my ears at the oddest of times. It’s also become a kind of sonic ligament in my relationship with Max.

So maybe I don’t entirely want to get rid of the spell of those words, but rather pay homage to them. And this is how you do that:

1/ Stopping to give Max some water, you admire the concentric beauty of a number of tiny pine cones scattered throughout a small grove of pine, the clump so dense that you have to waddle into it to do your collecting. 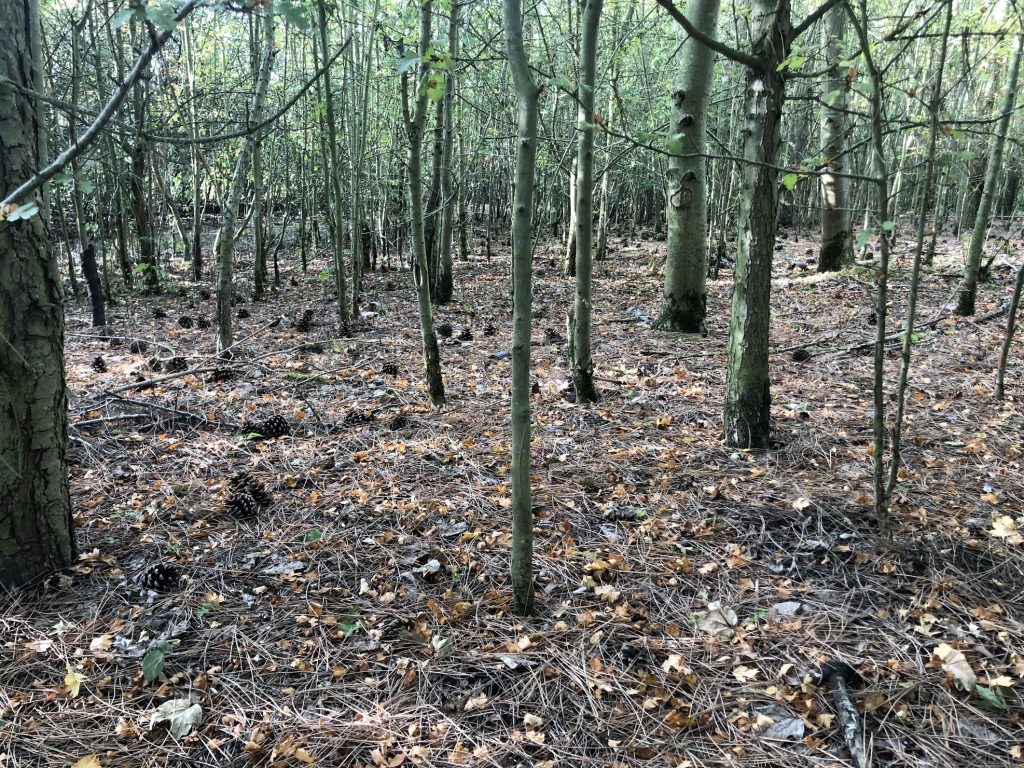 2/ You fill a bag with your pine cones, and then continue along the route of your walk, hoping to find a spot where you might spell something out with your cones. Barton Hills National Nature Reserve seems like a fitting canvas. 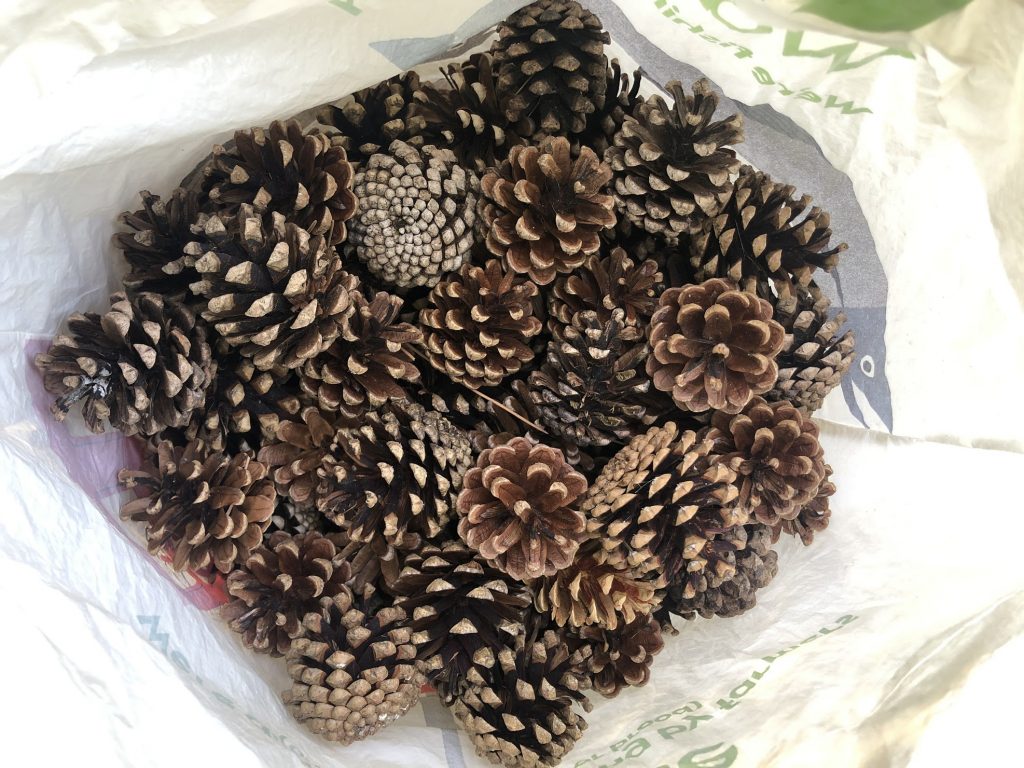 3/ A woman smoking with a table of pals at the pub where I stop to get a tea asks me why I’m hoiking around a Waitrose bag packed to the brim with small pinecones. I tell her that just five minutes away from this pub where she is sitting with her family, these pine cones all but carpet certain patches of ground. She looks at me as if I am talking about a distant planet. Her daughter admires Max’s haircut. 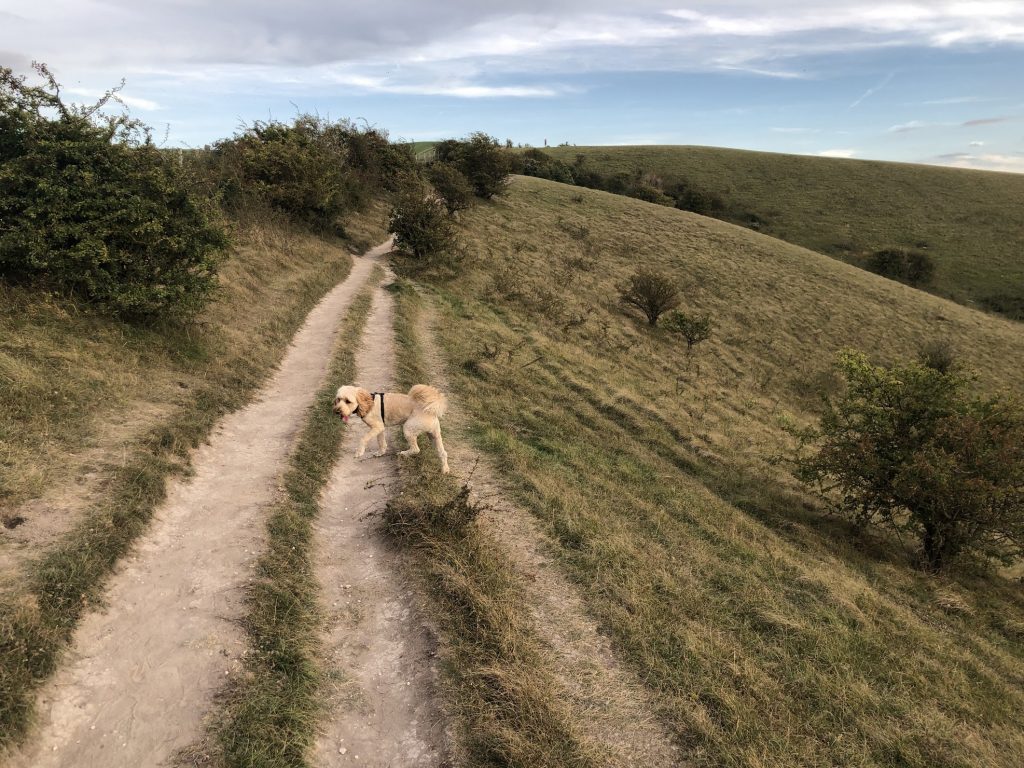 4/ Barton Hills Nature Reserve is a beautiful series of hills and vistas. Are not these milk thistle ((Silybum marianum) bracts, below, as gorgeous as stars? See how they also mimic or advertise their own remedial properties – for other than being used to treat the bubonic plague and promote digestive health, they are equally good as galactagogues: catalysts for increasing the production of breastmilk in nursing mothers. 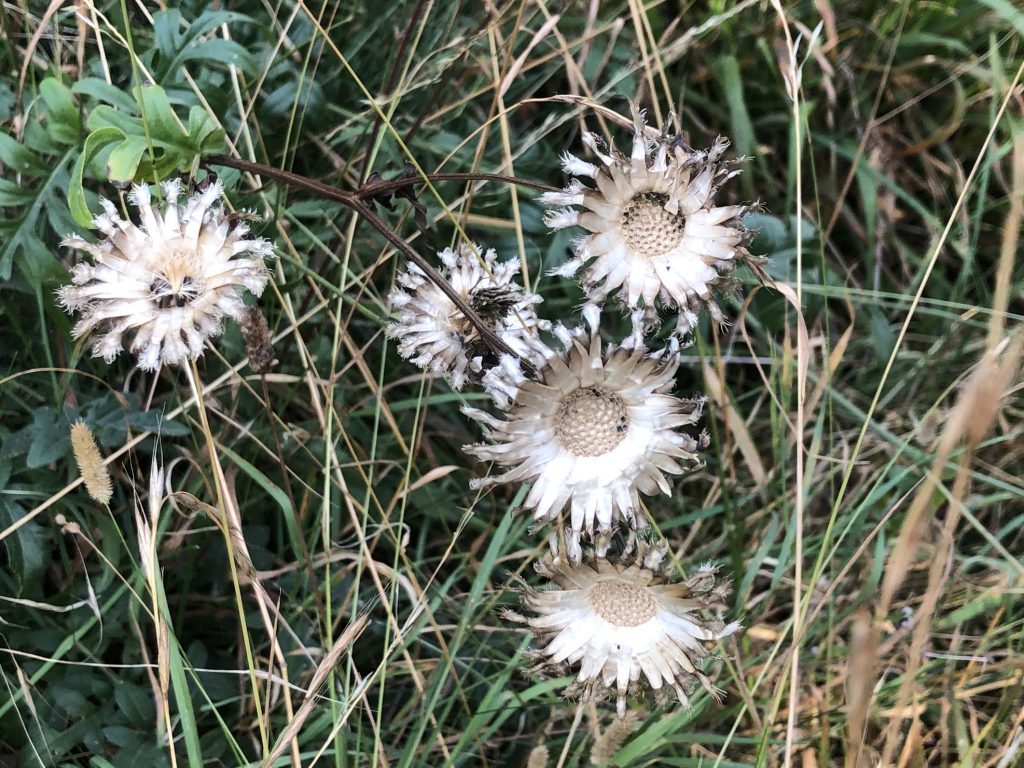 5/ I start the spell as the sun begins to set. When it is made, a very happy, loved-up Jamaican couple in their 40s stroll past. They spot the piece and somehow it adds to their enjoyment of the place and each other. This is an added bonus. 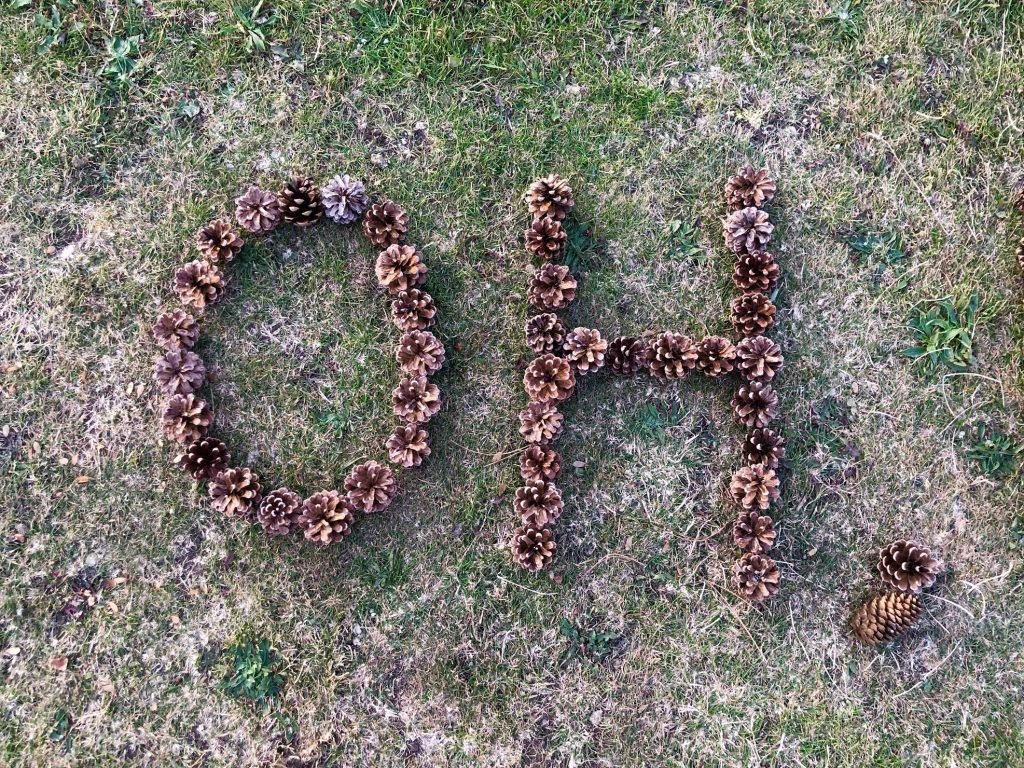 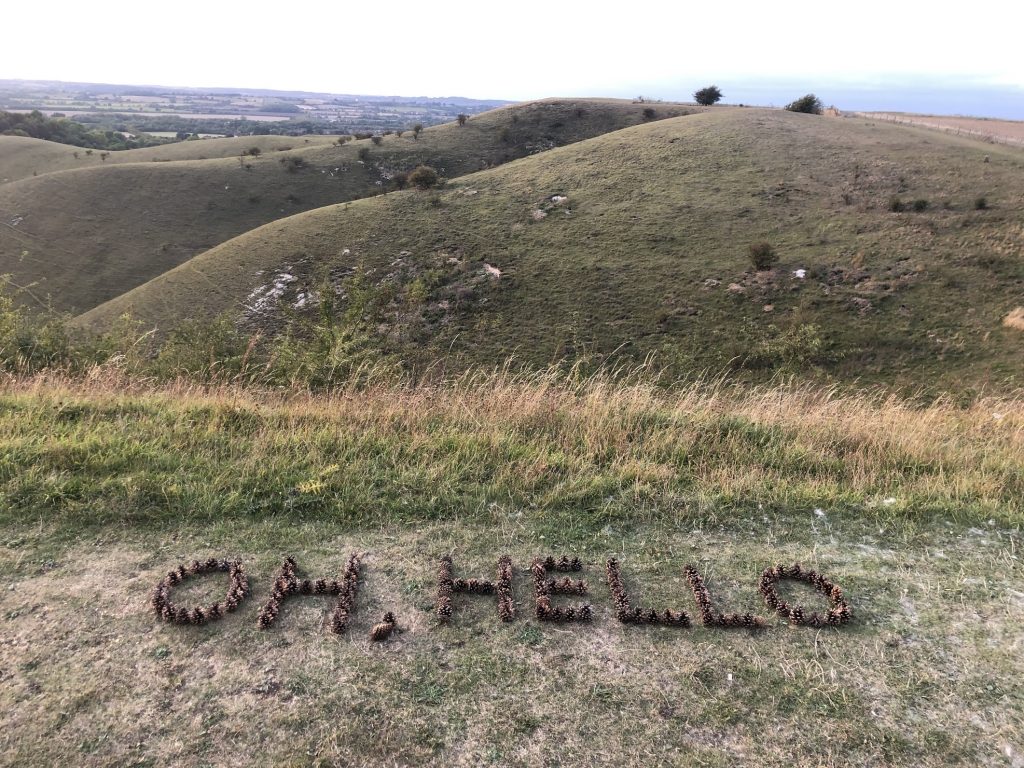 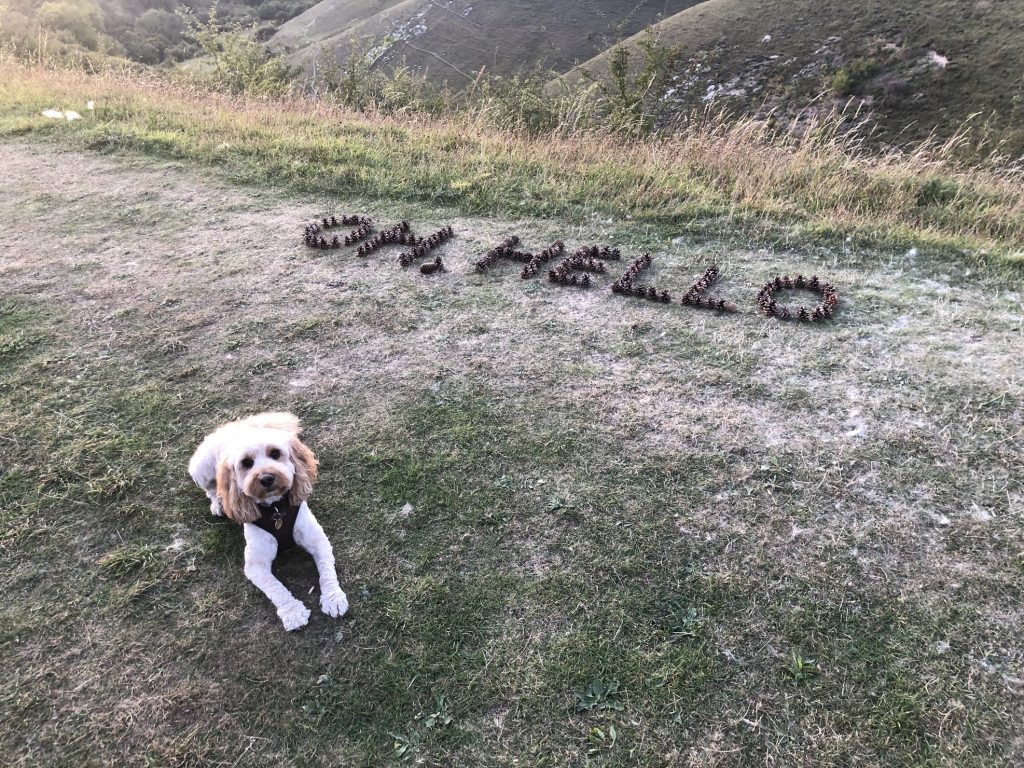 6/ Spell made. Max and I continue with our walk, back to Leagrave (we did this walk back-to-front, starting at Harlington, which is more ensconced in countryside than the once-small village of Leagrave, now just another suburb of Luton).

“Consider the pine tree!” riffs Seth Godin, in one of his marvellous audio essays gathered as Akimbo (the one I am listening to is on “Genius”):

“Not just any pine tree, the Jack Pine. If the weather gets hot or dry, the Jack Pine starts producing pine cones. Two kinds: male at the top, female at the bottom, so they don’t self-pollinate. Hundreds of pine cones. If one of the seeds at the top of the tree gets fortunate, it will get pollinated, by some pollen from a different Jack Pine tree. And then, more than a year later, that pine cone will land on the ground. And then, perhaps, there’ll be a fire. Because it takes a fire, or a heat of over 120 degrees for that pine cone to open up, and spread its seed. And then, then, it starts to get interesting. Because that seed might land on fertile ground, because there has been a fire. And it might germinate and grow. But it’s right next to hundreds, or thousands of other Jack Pine seeds. And a ratchet kicks in, so that if a tree is one inch taller than the tree next to it, it gets more sun, so it grows a little bit faster. And now it’s two inches taller, or a foot taller, or three feet taller. And then all the other pine trees fail to grow. And that is why the earth isn’t covered from top to bottom with pine trees. Because only one in a million actually goes up.”

Two of them even had and extra-carefully-chosen pride of place in forming the “comma” of my temporary piece of land art, the comma separating but also holding together the  OH and HELLO.

All of it created with pine cones near Barton-Le-Clay (Streatley) on Sunday 15th September, 2019, at four minutes to seven in the evening. 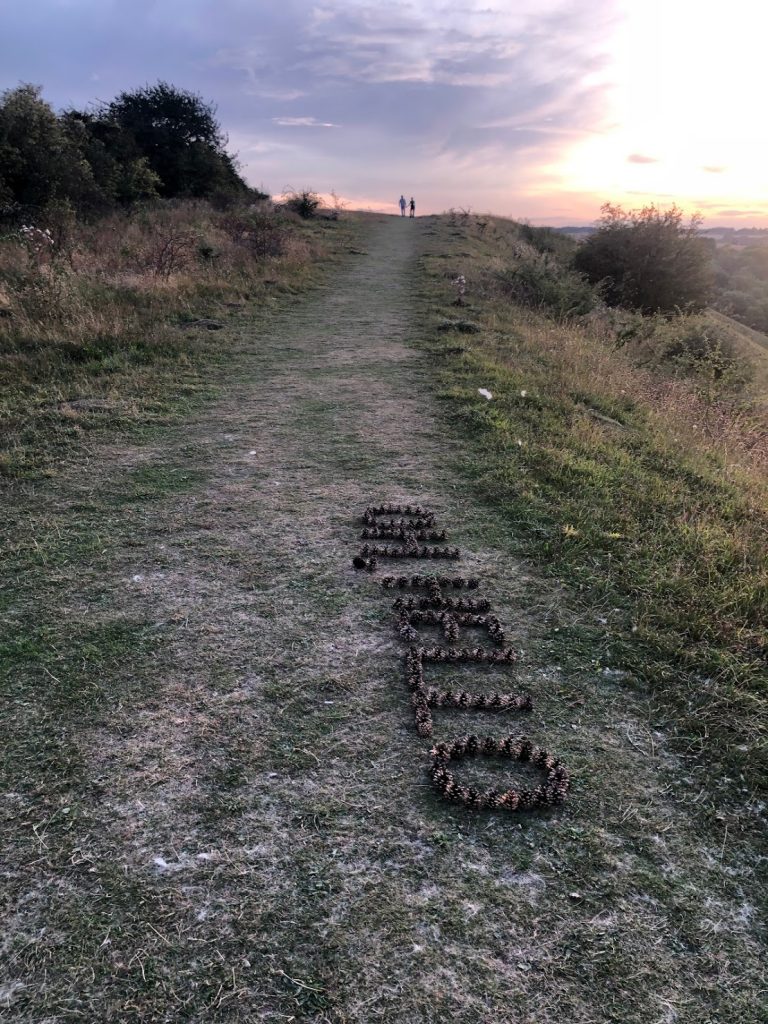