Using Tarot To Address The Burning Questions Of Our Lives The Tarot Fool (ii): What A Fool Believes

The Tarot Fool (i): In The Middle of The Road, There Was A Stone 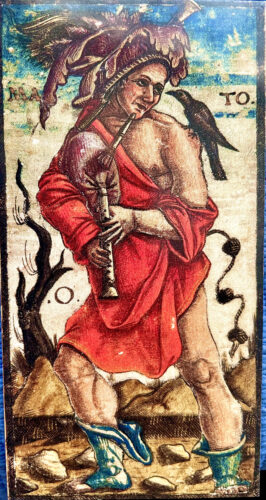 A human animal in floppy blue boots, ten little piggy toes poking out the front of them, completely assailable to the elements, is walking through a blighted, ravaged landscape: one lone, blasted tree wobbling in the background against a bleached out sky; whilst underfoot lie various bruising or even piercing stones that would make it almost impossible to proceed without some painful orthopedic stress on their semi-clad body.

This creature who stands looking out at from a tarot card, in the middle of the road we might call Life seems robust, and fleshy enough, well-fed, even though divested of appropriate clothing for the setting. They are wearing a bright red off-the shoulder toga or smock which looks as if it had been sewn together in a fashion so elementary as to be almost coming apart at the seams. Almost. As we are almost coming apart at the seams, always.

They, I will use non-binary pronoun for this archetype wears a hat, which looks as if it is made of dried oak leaves and sassafras. They are also playing some rudimentary bagpipes, the bagpipes are coloured a dull plum or eggplant hue, just like the hat. Bagpipes, at this point in human animal history (circa 1490) are usually made from the skin of a dog or a goat that perhaps once kept our wandering minstrel, if that is how they would identify, company: the limbs of the dead companion cut off and its torso sewn up so as to create a fuzzy pouch to holds the breath of a human animal or animal human which is now blown into the inflatable bag, and released as a warbling series of drones across the desolate landscape, the kind of music that might attract a raspy songbird – for there is also a crow here or a raven perched on one of the bagpipe player’s bony shoulders, as if the feathered familiar was readying itself to join in with whatever weltschmertz is currently being played out through this practice or process.

Oh the Weltschmertz, that lovely German expression, which translates as worldpain or world-weariness, arising more often than not from an acute awareness of the inadequacies and general unsatisfactory nature of our existence. For are we not, with a nod to everyone’s favourite Nazi philosopher Martin Heidegger, “thrown” into this domain of life, dropped as bombs sometimes drop from the sky into a potentially explosive family set-up, a socioeconomic rung on the ladder strethcing from poverty to privelege that was never chosen by us, or for us, even if ideas about karma might suggest some moral continuity between one form of existence and the next.

And while we’re doing etymologies, let us remind ourselves that the English word Fool, if that is what we are going to call this archetype, comes to us through the French fou, an evolution probably from the Vulgar Latin “follis” indicating a leather bag, or a blacksmith’s bellows, used to fan the flames so as to work some of the strongest metals known to us (aluminium and lithium alloys, copper, stainless, steel, manganese) so that Jeff Bezos might blast himself off into space in a giant white phallus, a giant cock of a spaceship, called blue origin. Within the word fool, there is always the sense of “windbag”, a podcaster if you like.

I have found one of the earliest examples of the Tarot in a deck of cards, created in Ferrara Italy in the late 15th Century. Today we refer to this deck as the Sola-Busca Tarot, and think of it as the first complete 78-card tarot deck, commissioned for a Venetian patrician by Duke Ercole d’Este (1431–1505) probably as part of some political or trade negotiations between the Ferrarese and The Venetians, Italy being a hotch-potch of disunited states in this period, and some would argue, still.

The conceptual forces ruling over this card according to Peter Mark Adams were provided by Duke Este’s court astrologer Pellegrino Prisciani who was influenced by Pagan Neoplatonism, and other non-Christian naughtiness. At the time, those interested in such things, rather than posting their theories on Reddit might have referred to themselves in hushed whispers as having a predilection for the “occult” (from the Latin occultus: hidden, concealed, secret). Nowadays we might study inherently occult processes as part of our social sciences education (psychology, economics, sociology) or even the natural sciences. Occult forces are often viewed by us so-called moderns as subconscious or unconscious processes, we are all occult urchins now. What is occult about this first card in the Tarot pack, this haunting image of a social misfit, or interloper, so at odds with the other more worldly characters, which we now refer to as the Major Arcana?

Just off to to one side of their head we can just about make out the letters MA and on the other side TO. MATO: crazy, insane, one sandwich short of a picnic. “Sei matto!” (you’re nuts!) we might exclaim in modern colloquial Italian at a friend who has just bought an oversized Kentia palm for their messy jungle of a flat, even though they have nowhere to put it. Matto, from the Latin Mattus, meaning drunk, which seems the only reasonable explanation for how this purchase was made. Between the semi-clothed fool and the blasted tree limb, the fifteenth century artist has also inscribed a non-digit, the placeholder zero, nought, or oh, a hovering globe of something denoting nothing.

Let us not forget that the Greeks, who to us current humans, are not-so-distant cousins, had no symbol for zero. How can nothing be something plagued their thinkers. As Charles Seife writes in Zero: The Biography of A Dangerous Idea, zero to the Greeks was an anathema. This is because it countered all philosophical orthodoxies of numbers, ratios and proportions put in place by Pythagoras. 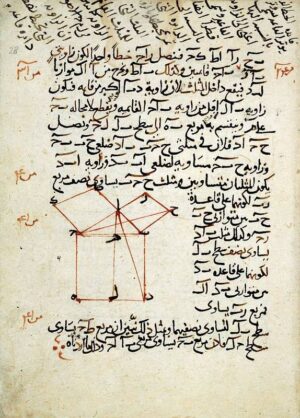 Ratios (especially that of the golden ratio) controlled musical, physical and mathematical beauty and order. Understanding nature was as simple as understanding the mathematics of proportions. In the Greek universe, earth sat neatly at the centre of the universe, and the sun, moon, planets, and stars revolved around the earth, each pinned inside a sphere. The ratios of the sizes of the spheres were arranged in a comprehensible orderly way. Naturally they were, designed by God, and maybe even were further proof of this God, so as the spheres moved, they made music at different pitches, all together, the moving planets made a “harmony of the spheres,” and so the heavens and our place as human animals as witnesses to this, became beautiful mathematical orchestra which all beautifully added up. “All is number,” wrote Pythagoras, and zero wasn’t a number. Zero was a threat.

Geometric figures, us included, have width and height. But what figure might have the width of zero and the height of zero. In a universe governed by ratios, everything has to be rational. But as we know now, when a number is multiplied by zero it disappears into the void through which it was set against, rather than generating further, greater, better, even more whole and ratio-nal numbers. No wonder zero was seen by the Greeks as a threat to everything they intellectually stood for. And no wonder we Westerners as the progeny of so called Greek civilization still find forms of foolishness to be deeply, deeply disturbing. For they remind us that we are but fools, animals first, and humans a distant second, that we cling onto the rational, proportioned human in us tenuously, and often not at all.

To introduce zero into any system of divine order is to introduce the idea of the void and the infinite into the safe space a seemingly ordered Universe. Trigger warning: choppy seas ahead.

In infinite space as that tagline from Ridley Scott’s Alien would have it no one can hear you scream, which is what Western thinkers did for a couple of millennia whenever the concept of zero was raised. But if this 500 hundred year old tarot card could talk or sing, it would probably sound something like the high-pitched wheeze, the droning zero of bagpipes, rather than the articulated music of the spheres. Or it would sound like one of Shakespeare’s fools talking in riddles and koans, often closer to poetry than prose, alighting on a kind of irreducible sense (we might call this Reality) through a willingness to contain as well as express nonsense.

The fool, the so-called insane creature, just like that anxiety provoking number or anti-number zero is a kind of provocation to everything within our physical as well as mental realm, everything that appears to “add up”, suggesting that when we are all stumbling across a rock-strewn stage of life, upon which we are very much stumbling now, that there is no ultimate essence in our conscious experience onto which we might cling, no matter how vivid any of it feels or seems, only surface, only dream, a plight that for many has been and will continue to be maddening in various ways.

For to inhabit the world of the Fool, the zero card of the deck, we need to allow ourselves to become unfixed a little, unmoored in some way from a picture postcard understandings of ourselves which we vainly try to encapsulate in podcasts, and Facebook posts, or in tweets, denoting some certainty about our place in the world, some sense-making haven or heaven.

But if we do this, if we surrender for a moment to the fool, and everything this archetype represents for our species, if we allow ourselves to drop into our own inner wilderness of being, that wilderness of thought and signification, might our fatigued retinas find there some kind of “home”, a resting place in the unrest of being and becoming. Let us see, shall we?