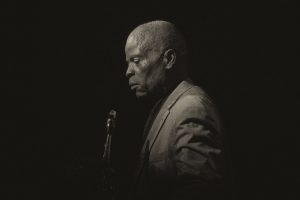 I sometimes think about the relationship between poems and stand-up comedy, especially those comedians who structure their acts around an artillery of one-liners. The one-liner is a very particular kind of comic vehicle, where the space between set-up and payoff might be as swift and devastating as a kidney punch. In both cases, we either yelp in sympathetic pain, recognition, or laughter.

There is something addictive about this style of aphoristic comedy and poetry, as there is something addictive about Kaveh Akbar’s work, which is fitting when considering the nature of a collection that explores how the poet reached a kind of truce with his addictions, as well as how he still withstands them, Jacob wrestling the angel on a daily basis.

I chose the poem Unburnable the Cold is Flooding Our Lives to learn because it seemed to have, line-by-line, the kind of payoff that classic comedy routines give us. I wanted to learn it by heart the way my 11 year old schoolfriend Dimitri Yiannakis would memorise large chunks of the then-still-kosher Cosby (we’re talking 1984) from his parents’ LP collection and then regale me with these at break time, as if they were his own. I wanted to have these one-liners on the tip of my tongue as Yiannakis, a stout kid, had had Fat Albert riffs to ward off too much reality. I wanted to feel like Oscar Wilde, or Kaveh Akbar, if only for a few minutes.

for a time they dragged

The poem begins with some great one-liners. There’s that zinger about prophets and calligraphy and mice, which has the ambivalence of rodents as well as our USB-connected critters. Calligraphy, the writing we envisage prophetic utterances being delivered in, is of course now banged out on laptops in Portcullion font for Rumi Instagram feeds. A prophet on Twitter is no longer Shams Tabrizi setting pages alight with just a thought, but secular dudes or dudesses with boilerplate profiles releasing pithy one-liners to their virtual followers (Rupi? Melissa?).

For all his Beyonce and Oprah validated recent renown, Rumi now functions predominantly in our culture a as series of gifs and mystical sidebars for self-help books and mindfulness sites: predominantly pink and decorative, detoothed, declawed, de-Islamified. And certainly in Coleman Barks’ adaptive hands, most likely “a mistranslation”. Akbar hits on the bathos of this spiritual downturn, both personal and cultural, in the specificity of the dethroned prophets’ food choices: the insipid but also slightly nauseating “soapiness” of their cottage cheese, the “forking” of it into their mouths suggestive of both monotony as well as mindless automaticity. It tastes of nothing, but it’s low in calories, so we continue to shovel it down. Is this not the sum and substance of our cultural moment?

There follows a series of deadpan, anhedonic epigrams:

Like the stand-up comedians who have become our emissaries of authenticity, the childlike ones who point out on Late Night TV shows that The Emperor isn’t wearing any clothes, these aphorisms are designed to re-present, whilst at the same time problematize the earnestness of our most noble aspirations: discipline, prayer, beauty, bewilderment. Akbar delivers them to us with the zing and sting of humour, as well as a kind of poker-faced earnestness, which from within the architecture of the poem helps to lodge the lines deep into our psyches like tiny foxtail grass arrowheads burrowing their way into animal fur.

Similar to the stand-up comedian’s unvarnished truths, these lines also speak to our inner-teenagers, our inner-sloths and addicts who know exactly what we should be doing in order to get our shit together, but can’t quite hang onto the golden thread of virtue and social responsibility to pull us out of our entropic states.

The fantasy of the enlightened being or prophet as alluded to at the end of the poem “light upon the earth / … steel bent around an endless black” is one we all have in whichever way it manifest for us, one which more often than not gets eroded with “and yet” iterations of despondency. Our across-the-board consumption of anxiolytics and antidepressants bear this truth out.

Think of how this functions for poetry. Poetry is fundamental to the human soul, and yet hardly anyone reads it. By and large it has little monetary worth. We will always have poets (and prophets) singing, writing, preaching for us and to us, and yet an algorithm now decides what we get to see on our social media feeds at any given moment. The stand-up comedian as well as a certain kind of poet is willing to give it to us straight. The effect when we read it or hear it is one of relief. We feel relieved of our almost fetishistic attachment to performance and continual improvement.

Compare the machinery of these initial lines to the professional one-line merchants we call comedians. Here a few from Jimmy Carr:

I know a couple who get on like a house on fire; they both feel trapped and are slowly suffocating to death.

Swimming is good for you… especially if you’re drowning.

If we’re all God’s children, what’s so special about Jesus?

In his book “Only Poetry” Carr writes: “We write poems because human existence is an unforgiving slog; we write them in the face of overwhelming odds and despite the ravages of time and fate…Wherever human beings are oppressed—by corrupt government, poverty or merely the specter of disease and death—poems thrive.”

Of course the book is not called Only Poetry, but Only Joking, and I have replaced the word “poem” for “joke” in the quotation.

Akbar’s one-liners have a similar resonance, but they also have an added weight beyond the pleasurably unsettling cognitive dissonance of jokes and poetry, language working to deliver both pleasure and pain, but also a kind of uncanny recognition, laughter in the dark. If this poem can be compared to any stand-up’s routine, it is probably to someone like Neal Brennan’s 3 Mics where Brennan moves between three microphones, each set seven feet apart from the other. He starts off on the first mic with 10 minutes of standard stand-up (guns, aging, race relations), then a blackout, followed by a spotlight onto the next mic for five devastating one-liners, ( “The irony of the word ‘Palestine’ is how much like a Jewish last name it sounds”); another blackout, and then 10 minutes of more “emotional stuff” like depression, addictions, failed relationships. This continues on rotation throughout the set. “It’s a fuller picture of myself,” is how he describes the paradigm. Brennan creates a kind of poem onstage, as the finest stand-ups do. Akbar creates a kind of searing stand-up routine on the page: poetry that is both pleasurable, moving, and thought-provoking.

About halfway through learning the poem though, I get stuck on these two lines.

The first time I read the couplet I gloss over it, yoking the notion, with a little associative leap from “my father now dreams in English” to losing “dead relatives”, to presumably the same “beloveds” referred to here. But when I start learning the poem by heart, the strange logic of these lines trips me up. I keep on saying: “How many times are you allowed to lose the same beloveds before you start believing they’re gone (for good). Or: before you stop believing they’re coming back. But “to stop believing they’re gone” bamboozles me. I finally get the words memorized but they still don’t make sense.

I think this poem hinges to some extent on who we take the beloveds to be. They might be the friends and family we lose through emigration, or some other form of loss. But maybe, as the second part of the poem suggests, the beloveds are also those substances who are there for us in our times of greatest need. When we are lonely, does not a cigarette, burning quietly away feel like a friend? When we are in despair, tired, desolate, bored, does not the drink, the spliff, the line of coke function as a lover or a some other caring being, gently taking us into their arms for consolation? Seen through this lens, we maybe stop believing the beloveds are gone, because these ersatz beloveds, the psychotropic substances are always on hand to rescue us, always just a phone-call away.

How to live without our “beloveds”, those people or things which numb or transfigure our pain? Deflective self-harm might be an option (“turning the chisel toward myself”) or taking the AA route, strongly allied to the ethics of self-mortification (“STEP FOUR: “make a searching and fearless moral inventory of ourselves”, cf. also STEPS 5-10) but is this the answer?

of remorse would deflate with each performance

At the end of the poem, an alternative solution is being posited, a kind of mindful stance, but also perhaps a poetic one:  “better / to sink a little into the earth and quietly watch life unfold / violent as a bullring”.

There is also, as there often is in Akbar’s work and life, the importance of gratitude, a theme that is picked up in other poems in the volume like “Portrait of The Alcoholic Three Weeks Sober” and “I Won’t Lie This Plague of Gratitude”:

In “Unburnable The Cold Is Flooding Our Lives” we find the gratitude of someone who perhaps realises they have survived self-annihilation through an over-reliance on their “beloveds”:

But even so, we don’t tarry too long in the realms of sentiment or sentimentality, as the poet brings us back into the more knotted and ambivalent territory of authentic unknowing, a stance shared with the stand-up comedian, spun out in a litany of and-yets:

I don’t read these and-yets as hopeless, nor do they cancel out the gratitude and its accompanying vision of engaging with the world like a poet-prophet “quietly watching” from the margins of our culture, but neither are we pawned off with a resplendent flourish. As Akbar writes in the final line of the final poem in this volume: “The boat I am building will never be done”.

To have it any other way would feel like a kind of bad faith. As G.K. Chesterton noted many moons ago: “the reason angels can fly is that they take themselves lightly.”