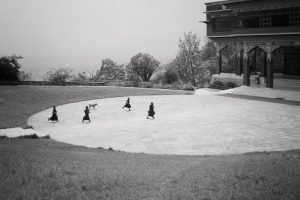 Recently I’ve been self-prescribing poems to learn by-heart for my own addictions and compulsions: to food, to drink, to my phone; to the constant stimulating stream of social media I now can’t possibly live without; to poetry; to YouTube videos; to television series and the week-long binges they necessitate; to certain kinds of interpersonal attachments, both “real” and virtual.

For days I’ve had that 80s schlockmeister Robert Palmer intoning his insidious little mantra into my limbic system: “Your lights are on, but you’re not home / Your will is not your own… / Might as well face it you’re addicted to love.”

Truth is, we are all now addicted to something or other. Maybe it’s always been that way, or maybe we’re facing a rampant new strain of a very old problem, outlined as far back as Plato and The Prophets. As Kaveh Akbar writes in another poem that expores this, one I’ve been by learning by heart recently:

Wherever we sit on the spectrum of compulsive behaviours, are these not the justifications we all use on a daily basis? I know I do.

Here are some poems you might want to self-prescribe (learning by heart?) for whatever compulsive behaviour has got its claws into you at the moment.

THE DAY YOU STOP

One day will be tomorrow. The day of truce
and socket and beaten. The day
you shrink into stopping, the day threadbare and pain-
shamed and limit. Until then,
you might be continuing
because that is what you do until the last moment
when you must stop.
Still everywhere the shiver
is slow on the tongue, insistent. You will stop
for some weeks,
your body taking body
from your blood
and the back of the throat,
and those weeks will be thank-you-God acres
of erasure and resurrection and the clabber of other small prayers
you stoop to collect. You will be diligent
because you have paid good money
to be taught how to stop, slanting off
from queasy transgressions, those
clutches and source. Even so,
we shouldn’t fool ourselves;
resolve cannot liquefy need.
You will probably start again soon after
you have completed the stopping,
the unwashed swell of rapture
taking your face through teeth to heartbeat,
every beaten moment on the couch.
Every relief: have hereafter and clamor.
Have nothing worse.
You’ll follow the mumble through
that ache that is tincture. Is rule
and bundle. Is famished inside you
and thrumming. You understand
there are two types, and you are
the type to release. If you had to choose
between settle and suture, you know what you’re after.
You’d pour yourself hitches
and battery. Pour yourself each subsequent time.
It will become impossible to believe
you will ever stop for good.
Stopping is not counter or suspect,
but easing back is all that is left,
the impulse has got you, it’s all that survives.

You have decided to live. This is your fifth
day living. Hard to sleep. Harder to eat,
the food thick on your tongue, as I watch you,
my own mouth moving.
Is this how they felt after the flood? The floor
a mess, the garden ruined,
the animals insufferable, cooped up so long?
So much work to be done.
The sodden dresses. Houses to be built.
Wood to be dried and driven and stacked. Nails!
The muddy roses. So much muck about. Hard walking.
And still a steady drizzle,
the sun like a morning moon, and all of them grumpy
and looking at each other in that new way.
We walk together, slowly, on this your fifth day
and you, occasionally, glimmer with a light
I’ve never seen before. It frightens me,
this new muscle in you, flexing.
I had the crutches ready. The soup simmering.
But now it is as we thought.
Can we endure it, the rain finally stopped?

I HAVE ROADS IN ME

winding within my arteries
into distant hills
of memories,
where dreams float like dandelion fibers
on bright, chill, breezy
mornings under a canopy
of cottonwood branches.
Where leaves glimmer
sunlight
roads turn.
I have roads in me
where drums pound a sacrifice
and beckon
to again believe in life’s wonder,
where I learn the intense passion,
seeing the sparkling, dewdripping
leaves upon moist, pine-needled ground.
My heart restored,
I am guided
by stars
and a raging desire to live.

Vodka, whiskey, gin. Scotch, Red wine, cognac,
brandy—are you getting thirsty yet?—ale,
rye. It all tastes good: on the rocks, with a splash,
side of soda, shaken
not stirred, triple,
olives, one of those nutritious little pearl
onions, a double, neat,
with a twist. Drink
it up. Let’s have a drink: dry beer, wet beer,
light, dark and needled beer. Oh parched,
we drank the river
nearly to its bed at times, and were so numb
a boulder on a toe
was pleasant pain, all pain
was pleasant since that’s all there was, pain,
and everything that was deeply felt, deeply,
was not. Bourbon, white and pink wine, aperitif,
cordial (hardly!), cocktail, martini,
highball, digestif, port, grain
punch—are you getting thirsty yet?—line them up!
We’ll have a drink
and talk, we’ll have
a drink
and die, grim-about-it-with-piquancy.
It was a long time on the waiting list
for zero
and I’m happy
for the call out of that line
to other, less predictable,
more joyful
slides to ride on home.

Can we stifle the old, the lingering Remorse,
That lives, quivers and writhes,
And feeds on us like the worm on the dead,
Like the grub on the oak?
Can we stifle implacable Remorse?

Hope that shines in the windows of the Inn
Is snuffed out, dead forever!
Without the moon, without light, to find where they lodge
The martyrs of an evil road!
The Devil has put out all the lights at the Inn!

A being who was only light, gold and gauze,
Throw down the enormous Satan;
But my heart, which rapture never visits,
Is a playhouse where one awaits
Always, always in vain, the Being with gauze wings!

From mind to mind
I am acquainted with the struggles
of these stars. The very same
chemistry wages itself minutely
in my person.
It is all one intolerable war.
I don’t care if we’re fugitives,
we are ceaselessly exalted, rising
like the drowned out of our shirts…

What is pornography? What is dream?
American River Sky Alcohol Father,
forty years ago, four lifetimes ago,
brown as bourbon, warm, you said to me,
“Sorry sorry sorry sorry sorry.”
Then: “You’re killing your mother.”
And she: “You’re killing your father.”
What do men want? What do fathers want?
Why won’t they go to the mothers?
(What do the mothers want.)
American River Sky Alcohol Father,
your warm hand. Your glass. Your bedside table gun.
The dock, the water, the fragile, tough beach grass.
Your hand. I wouldn’t swim. I wouldn’t fly.

And I am told
That the beating heart
I stuffed with the unbroken spiral
Of a small, round apple
And glazed all over
With dark, sticky blood
Was not quite right

And I take up my blade

DELINQUENT HEARTS ON THE RAILROAD TRACKS

Eat the shrooms and desire me. We tag
the car, our tailing Fs and Ss rising
off the rusted side. You say the paint cans
hiss like the king snake curled up under your porch.
I laugh and jake, vodka gunning. The highway
is a distant thrum. When you smash the caboose window
with a rock in your fist I know the drugs are working.
We nimble along the tracks back to stashed
bottles filled with gas and oil. When the train
rolls by we toss and laugh and streak as fire
consumes the side of the cars. It’s a dragon
you brag, and high we rise up over crappy
lives we knuckle drag. We drink and smoke and tag
and dodge the railroad cops bobbing for our necks.
It’s just after midnight and the laughs still come.
I’ve got a scheme to avoid being caught.
When you touch me I know you want me forever.

In a state of chortle sin—once he reflected,
swilling tomato juice—live I, and did
more than my thirstier years.
To Hell then will it maul me? for good talk,
and gripe of retail loss? I dare say not.
I don’t thínk there’s that place

save sullen here, wherefrom she flies tonight
retrieving her whole body, which I need.
I recall a ‘coon treed,
flashlights, & barks, and I was in that tree,
and something can (has) been said for sobriety
but very little.

The guns. Ah, darling, it was late for me,
midnight, at seven. How in famished youth
could I forsee Henry’s sweet seed
unspent across so flying barren ground,
where would my loves dislimn whose dogs abound?
I fell out of the tree.

IF THERE’S A GOD

No other word will do. For that’s what it was.
Gravy.
Gravy, these past ten years.
Alive, sober, working, loving, and
being loved by a good woman. Eleven years
ago he was told he had six months to live
at the rate he was going. And he was going
nowhere but down. So he changed his ways
somehow. He quit drinking! And the rest?
After that it was all gravy, every minute
of it, up to and including when he was told about,
well, some things that were breaking down and
building up inside his head. “Don’t weep for me,”
he said to his friends. “I’m a lucky man.
I’ve had ten years longer than I or anyone
expected. Pure Gravy. And don’t forget it.

If you have further suggestions for poems or collections on this theme, could you please leave a note in the Comments box below. Thank you!