Friendship As A Template For All Relationships? 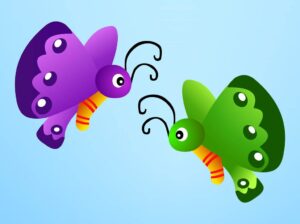 I was listening to a discussion between David Whyte and Sam Harris  recently, where Whyte read his mini-essay (300 words) from his book Consolations: The Solace, Nourishment and Underlying Meaning of Everyday  Words. The piece read and discussed on the podcast was “Friendship” (reprinted below).

His words, to my ears, contained a lot of wisdom. It also made me wonder if maybe one of the ways we can get a bit more “chill” and “right-brain” with regard to the often stormy relationships in our life (lovers, partners, family and whatnot) is if we use some kind of Friendship Template with these more ambivalent connections?

Not necessarily Whyte’s Template though, please feel free create your own!

If we do decide take his ideas on board though, what might be required of us and our often fraught thought and language knotted minds in order to sustain such a vision through ongoing Love-Hate and Indifference Modes that we feel with respect to our nearest and dearest?

Maybe we can ask ourselves this question to begin with:

Are you a true “friend” to your partner, your children, your parents, or sibs? What would that even “mean”,  for you?

But even more importantly than the above question (which often triggers an Inner Critic saying just how shit a friend/partner/sibling we are – be careful of that, it’s just more binary language):

What kind of behaviour (especially when we are triggered and upset by something someone has said or done) would be most conducive to repairing those bonds? For disrupted they will get. Again, and again, and again.

Especially as (mis)communication is such a prevalent part of human animal interacting.

How could it be otherwise? We can’t read each other’s minds! All we can go on is their in-the-moment languaging (often done through one-dimensional text on a screen, with no context as to where the language is coming from). But even with some context, with facial expressions, and tone of voice it can be tricky. Someone’s sour mood or dejected tones might reflect stuff that has nothing to do with us, and yet we get pulled into their inner storms, and they into ours.

Mostly though, the problem as I see it is language. Yep, words. Just like these silly things on your screen right now. No more “real” in essence than all the zeros and ones that make up the internet. How easily language breaks down, or isn’t in any way sufficient in terms of expressing the multidimensionality of us, us creatures who contain so many different parts and personas in our psyches. 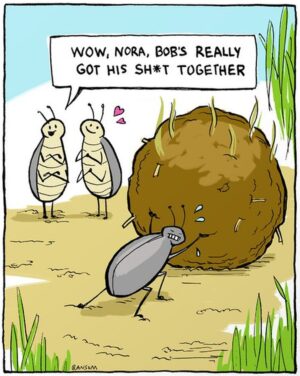 Relationships are such fragile entities. They’re more like butterflies and Daddy Long Legs than the more robust cockroach or Dung Beetle (one of my favourite insects). Which means that they need to be treated with care and attention – especially if we or the other person is quite a sensitive creature. We do this quite often with and for friends, but not always for those people who have become “part of the furniture” in some way to our lives (a partner, or lover, a family member).

The David Whyte vision of Friendship as a template for all relationships, tiny and large, is a Big Ask.

It asks of us time, energy, and a great number of self-regulation resources. But maybe it’s do-able if framed in the right way. Or maybe not?

For Whyte, and others who have written on this topic, it’s forgiveness – for slights big and small, and is often the case: miniscule. This seems to be really key to the whole shebang.

As we know the left-hemispheric Language Mind (s/he-said, s/he-said stuff – usually with a focus on the Past Now) doesn’t really “Do” Forgiveness or Letting Go of Past Hurt very well. That’s more Right-Brain stuff. So if you feel unforgiving towards someone, you’re probably not firing (brain-wise) on both cylinders!

Interestingly, receiving an apology seems to activate the language zones in the Left Hemisphere, especially the left middle temporal gyrus. Whereas forgiveness seems to be more highly correlated with right temporo parietal junction (TPJ) activation. Which corresponds with what we know overall with regard to hemispheric differences: i.e. we do more relating and engagement with the Actual World As It Is through our right-hemispheres, whereas the left just plays around and rearranges stuff we already know, or as is more often the case: think we know.

Right Hemisphere equates to some extent as a fluffy, cuddly mammalian-relating brain bulge, which collaborates with language areas like Wernicke and Broca, located in the Left Hemisphere, to get those relational energies heard and felt.

The Right Hemisphere is also larger in mammals than in other creatures – take that, reptiles! But size doesn’t seem to matter to the Left Hemisphere, which is now the dominant hemisphere for our species and its culture (hello Social Media!). This is a pity because this hemisphere of the brain is also The Shit-Stirrer, through and through.

Apart from strirring shit, Left Brain is really good at problem-solving (and making!) which it does largely through thought and language. Whereas our Right Hemispheres seem to engage with the world more holistically and less linguistically. So if you want connection and cuddles, make sure you’re in Right Hemisphere when relating to someone else. If you want strife, stick with the problem-solving/making language stuff. And of course, as with everything, lots of other factors come into play too.

Forgiveness seems to require our language-making left brains to let go (just a little) of some of the chatter and analysis we do when hurt or triggered in some way.

This seems to require a settling of our nervous systems, changing our current state (i.e. our embodied nervous systems) rather than our minds through language. There are many ways to do this. Most helpful I’ve found is to become super-present to the Here and Now for a while, or maybe distracting ourselves with something meaningful. Or if necessary doing some unhooking/defusion practices,

Only then, in a settled ventral-vagal third gear, can we go back to valuing and loving other people and ourselves in a way that we might like to be loved: as flawed human animals. Isn’t that person who has just annoyed you, You In Another Guise, or You On A Different Day, or You-Triggered?

Which is to say: someone doing their best with the hand(s) dealt to them. And often screwing up, to some extent, in the process.

is a mirror to presence and a testament to forgiveness. Friendship not only helps us see ourselves through another’s eyes, but can be sustained over the years only with someone who has repeatedly forgiven us for our trespasses as we must find it in ourselves to forgive them in turn. A friend knows our difficulties and shadows and remains in sight, a companion to our vulnerabilities more than our triumphs, when we are under the strange illusion we do not need them. An undercurrent of real friendship is a blessing exactly because its elemental form is rediscovered again and again through understanding and mercy. All friendships of any length are based on a continued, mutual forgiveness. Without tolerance and mercy all friendships die.

In the course of the years a close friendship will always reveal the shadow in the other as much as ourselves, to remain friends we must know the other and their difficulties and even their sins and encourage the best in them, not through critique but through addressing the better part of them, the leading creative edge of their incarnation, thus subtly discouraging what makes them smaller, less generous, less of themselves.

Through the eyes of a real friendship an individual is larger than their everyday actions, and through the eyes of another we receive a greater sense of our own personhood, one we can aspire to, the one in whom they have most faith. Friendship is a moving frontier of understanding not only of the self and the other but also, of a possible and as yet unlived, future.

Friendship is the great hidden transmuter of all relationship: it can transform a troubled marriage, make honorable a professional rivalry, make sense of heartbreak and unrequited love and become the newly discovered ground for a mature parent-child relationship.

The dynamic of friendship is almost always underestimated as a constant force in human life: a diminishing circle of friends is the first terrible diagnostic of a life in deep trouble: of overwork, of too much emphasis on a professional identity, of forgetting who will be there when our armored personalities run into the inevitable natural disasters and vulnerabilities found in even the most average existence.

Through the eyes of a friend we especially learn to remain at least a little interesting to others. When we flatten our personalities and lose our curiosity in the life of the world or of another, friendship loses spirit and animation; boredom is the second great killer of friendship. Through the natural surprises of a relationship held through the passage of years we recognize the greater surprising circles of which we are a part and the faithfulness that leads to a wider sense of revelation independent of human relationship: to learn to be friends with the earth and the sky, with the horizon and with the seasons, even with the disappearances of winter and in that faithfulness, take the difficult path of becoming a good friend to our own going.

Friendship transcends disappearance: an enduring friendship goes on after death, the exchange only transmuted by absence, the relationship advancing and maturing in a silent internal conversational way even after one half of the bond has passed on.

But no matter the medicinal virtues of being a true friend or sustaining a long close relationship with another, the ultimate touchstone of friendship is not improvement, neither of the other nor of the self, the ultimate touchstone is witness, the privilege of having been seen by someone and the equal privilege of being granted the sight of the essence of another, to have walked with them and to have believed in them, and sometimes just to have accompanied them for however brief a span, on a journey impossible to accomplish alone.

Please feel free to get in touch either by email or telephone (07804197605) if you are struggling to find some friendship in your heart for someone you would still like to be close to in some way.

Oh, and if you made it to the end of this page.

Here are some of my favourite Dung Beetle Cartoons. Gotta love this dude! 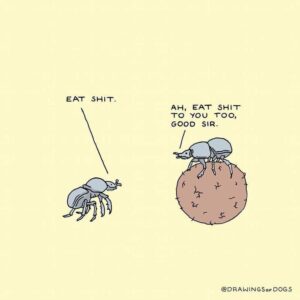 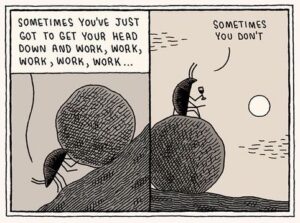 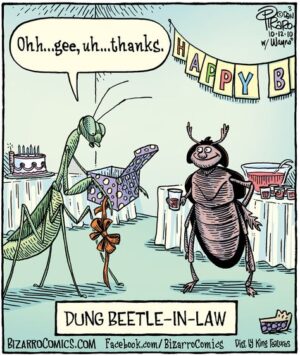 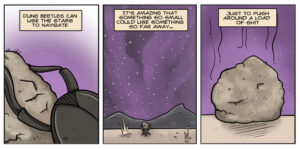