By Hearting King of The River by Stanley Kunitz

By Steve Wasserman On May 14, 2015 · In By Heart, Existential knots, My koans, Stanley Kunitz 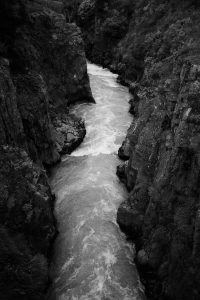 I am stuck on the third stanza of ‘King of The River‘.

If the power were granted you
to break out of your cells,
but the imagination fails
and the doors of the senses close
on the child within,
you would dare to be changed,
as you are changing now,
into the shape you dread
beyond the merely human.
A dry fire eats you.
Fat drips from your bones.
The flutes of your gills discolor.
You have become a ship for parasites.

I read a couple of lines. Repeat them again and again. Think I have them. But as soon as I go back to the first two stanzas which are almost “there” (in my head), the third slips away again like that “yard of muscle” we call “fish”, thrashing its way out of my memory’s grasp.

Perhaps the third stanza won’t stick because I’m not sure what Kunitz is trying to say in it. I get the biological-driven quest of the first two, the force of the libido driving through the niceties of thought.

The mind would like things to be just-so before it acts, but things are never just-so. Well, hardly ever.

But what’s happening in the 3rd stanza, Stanley?

It starts with another biological-denying fantasy: “If the power were granted you/to break out of your cells…”. These being the cells as in the structural and functional units of our organismic life. But equally, other enclosures: the alcoves, sanctuaries and garrets where we think, read, pray and write poems.  The mausoleums, vaults, catacombs where we bury ourselves away to live or die.  The dungeons, ghettos, stockades, where others put us out of the way.

Looking for an image of some cells to use with this post, the ones I find reminds me of that incredibly bleak illustration by Robert Crumb ‘No Way Out’. How lonely, in some way, the human cell! Each one hived off from the other. How lonely the salmon in its bruised and battered quest. Yes, there is union “in the orgiastic pool”, but for the most part, the life journey of this creature is a solo one.

And what do cells at their most basic level do? Metabolic processes, division, biosynthesis.

But we also can’t break out of our cells, ourselves, can’t escape the biological hoopla that drives us down rivers studded with hope-dashing rocks, painted “with our belly’s blood”.

And yet. And yet. The suggestion stands that imagination might offer some respite. Unless, and isn’t this the most crushing of recognitions, imagination itself “fails”. What does that failure of the imagination entail? Or rather what does the success of that cell-escaping imagination need? Kunitz seems to be suggesting that imagination requires a sensitivity and wonder to the world around us akin to that of the child, albeit perhaps a mythical child, the inner-infant that plays and screams when it’s excited or sad.

But then he throws in this line about “daring to be changed”, implying that some fork-in-the-river choice need to be made at a certain point. And yet no choice need be made either because we are already “changing now/into the shape you dread/beyond the merely human”.

I take the “merely human” to mean that deluded, immortal sense of ourselves we have, that sense that the cup of tea I’m just about to make will be one of a neverending series of cups, for how could this mere, day-to-day human ritual change?

Until we age, perhaps, sickening, wear out, die. Or experience the death and entropy around us.

A dry fire eats you.
Fat drips from your bones.
The flutes of your gills discolor.
You have become a ship for parasites.

The “right” poem (right being right for you, your distinctive antidote, your self-cure) will often take you places you might not want to go.

I did not want to spend over a month committing Kunitz’s poem to memory. I wanted my by-heart “possession” of the poem to be swift, fluent, uncomplicated. I would apply effort, link-begetting intelligence, creative-visualisations, whatever it took to get the poem into the spawn pool of my heart where it might swim around with all the others I’ve caught so far in this way.

That is the sound of Stanley Kunitz chuckling. That is the sound of Stanley Kunitz saying: “The Sockeye salmon from central Idaho travels over 900 miles, climbing nearly 7,000 feet in order to return from the Pacific Ocean to the freshwater lakes of its birth, so that it may reproduce, and you want to consume this journey like you might consume a chunk of flesh hacked off the body of this creature? In what? An hour, a day, a week? Instantaneously?!”

I’m not sure if Kunitz was a cusser, but if he had been, I imagine him finishing his hard-nosed but good-humoured observation with “…for chrissakes, Steve, is that really the deal here? Jesus Christ!”

Each section of Kunitz’s poem is built around an uncomfortable truth, a truth we all struggle with: that things are not as they should be, that life bears no responsibility in providing us with the ideal. If A were clear enough, if B were still; if C was given to me; if D was granted; if E were pure enough.

What do we do with all these (k)nots?

The poem was one giant (k)not: no matter how hard I tried, it just didn’t want to swim into my head. I would spend hours memorising – even just ten or twelve lines, a few hundred slippery word fish, which before I knew it, had slapped and thrashed and tumbled their way out of my memory again.  The process felt like snakes and ladders, but all snakes, no ladders. I worked hard at getting stuck into the poem, but all I did was get stuck in the poem. I couldn’t move forward at the pace I wanted, I needed, I’d hoped for.

I don’t know. Maybe just “because”.

Because this by-hearting process is not clear, not still, not given, often fails us; not pure. No, that’s not true, purity it has: the purity of utter bewilderment and incapacity.

So what did I do?

In the words of Frank O’Hara:

We know this, but then the next question is maybe why does one continue?

The answer to that question is I think deeply embedded in this poem. It has something to do with following one’s vital impulses, with passionate struggle, with  Csíkszentmihályian “flow“.

And a kind of faith too.

The faith was also about knowing that the journey would be worth it.