The Fool (v): Constant Craving The Magician (i): It Is Sad, But It Is What It Is

Jean-Paul Sartre Tries To Give Up Smoking 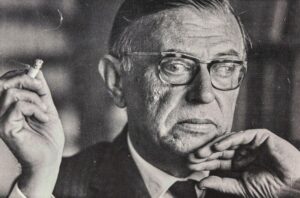 I love this quote from Being and Nothingness where JP psychanalyses himself and comes to a profound realisation of what “spell” is required in order for him to finally give up smoking. He’s got it all worked out. Psychologically/philosophically, this really does read like a watertight solution.

Some years ago I brought myself to the decision not to smoke any more. The struggle was hard, and in truth, I did not care so much for the taste of the tobacco which I was going to lose, as for the meaning of the act of smoking. A complete crystallization had been formed. I used to smoke at the theater, in the morning while working, in the evening after dinner, and it seemed to me that in giving up smoking I was going to strip the theater of its interest, the evening meal of its savor, the morning work of its fresh animation.

Whatever unexpected happening was going to meet my eye, it seemed to me that it was fundamentally impoverished from the moment that I could not welcome it while smoking. To-be-capable-of-being-met-by-me-smoking: such was the concrete quality which had been spread over everything. It seemed to me that I was going to snatch it away from everything and that in the midst of this universal impoverishment, life was scarcely worth the effort.

But to smoke is an appropriative, destructive action. Tobacco is a symbol of “appropriated” being, since it is destroyed in the rhythm of my breathing, in a mode of “continuous destruction,” since it passes into me and its change in myself is manifested symbolically by the transformation of the consumed solid into smoke. The connection between the landscape seen while I was smoking and this little crematory sacrifice was such that as we have just seen, the tobacco symbolized the landscape. This means then that the act of destructively appropriating the tobacco was the symbolic equivalent of destructively appropriating the entire world. Across the tobacco which I was smoking was the world which was burning, which was going up in smoke, which was being reabsorbed into vapor so as to reenter into me.

In order to maintain my decision not to smoke, I had to realize a sort of decrystallization; that is, without exactly accounting to myself for what I was doing, I reduced the tobacco to being nothing but itself—an herb which burns. [This is the spell!] I cut its symbolic ties with the world; I persuaded myself that I was not taking anything away from the play at the theater, from the landscape, from the book which I was reading, if I considered them without my pipe; that is, I rebuilt my possession of these objects in modes other than that sacrificial ceremony.

As soon as I was persuaded of this, my regret was reduced to a very small matter; I deplored the thought of not perceiving the odor of the smoke, the warmth of the bowl between my fingers and so forth. But suddenly my regret was disarmed and became quite bearable.

Needless to say, after writing this he continued to smoke for the next 40 years of his life and died of a pulmonary edema. brought on, no doubt by his favourite substance.