By Steve Wasserman On August 13, 2016 · In Anxiety, Feel Better, Freud, Nature, Things My Garden Has Taught Me 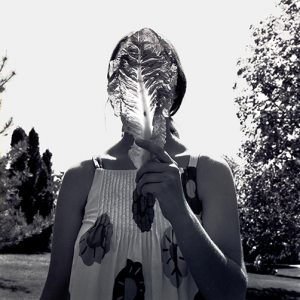 Every day, the hundreds of fronds that make up the lettuce in my raised beds launch into a Lactuca Sativa version of that 80s stadium anthem by Simple Minds:

The din of all that lettuce chanting in unison is deafening.

I’m eating two large salads a day, sometimes diarrhoeic with the stuff. I’ve made lettuce soup (tastier than it sounds), lettuce and spring onion tart, lettuce gratin, braised lettuce and peas, even a lettuce and soya mince curry, and a kind of lettuce cake (!) but even this is not enough for the emotionally manipulative leaf vegetables:

Those are some seriously some needy lettuce out there.

Not having heeded accepted wisdom on planting out lettuce (small but frequent sowings) I have filled four raised beds, and the front street-allotment with Deer Tongue, Australian Yellowleaf, Reines Des Glaces, Morton’s Mix, Winter Purslane and Salad Bowl, so that now there’s more lettuce in the garden than I, the neighbours, patients, friends, family, or anyone else I can foist salad onto might ever eat.

Lettuce is a member of the daisy family Asteraceae, and was once a weed until the ancient Egyptians thought of turning it into a salad. It feels weed-like at the moment in the extent of its proliferation. Although had I a garden full of weeds or daisies would they be singing maudlin, jabby synthpop with rock overtones at me? If anything, it might be something equally annoying in an 80s vein (Rain or Shine by Five Star?) but without the pressure, the guilt, the anxiety.

Where does this lettuce anxiety, or any anxiety for that matter come from?

Like the lettuce itself, anxiety grows out of tiny seeds of doubt and worry, until at best it starts to niggle, or at worst launches into a stadium-filling thrum of angst.

Anxiety is often a future-oriented mood state, looking towards the horizon for some kind of potential threat which it can then start to kvetch about.

The threat might be that of failure: me unable to eat or give away all the lettuce I have planted and how that sits with my beliefs and sense of self. Worry and anxiety hooks into this belief system (“I’m a ‘good person’ because I never waste food”) and goes on the rampage.

Anxiety, unlike fear, is the howl of a fire alarm when there’s nothing more than burnt toast or a stir-fry that’s set it off. Or that car nudged by a kid on a skateboard, the alarm itself not being able to tell the difference between an accidental brush-past and a crowbar.

THINKING: ruminating 24/7 about all that soon-to-bolt lettuce

ATTENTION: Only having eyes for the lettuce and how fast it’s growing (slow down, lettuce!). Thinking about lettuce as if it were an invading weed, everything else in the garden, all the colour and splendour of flowers and other plants slipping into the background

MOTIVATION: I’ve got to do something about this sodding lettuce, NOW!

BEHAVIOUR: Eat as much lettuce as I can stomach even though not particularly enjoying it.

Over the last century, various schools of psychology have fleshed out our understanding of anxiety. Freud, an anxious man himself, saw it as a warning signal that “unacceptable unconscious impulses” (me wanting to throttle or decimate all lettuce?) are about to enter conscious awareness upsetting the homeostatic apple-cart, or veg garden, that balance between id, ego, and super-ego.

Writing in his 1920 General Theory of Neuroses, he links his understanding of anxiety to Darwin’s investigations. Darwin experienced first hand the automaticity of anxiety when attempting (and failing in this attempt) at the to control his startle-reflex as a puff adder from behind thick plate glass of the reptile house in London Zoological Gardens, lashed out at him.

The early twentieth century saw interest develop in what is now known as classical conditioning, which explains how anxiety can electrify even emotionally neutral stimuli. If I normally have lettuce at lunch time, and eating lettuce starts to become associated with feelings of stress or guilt, then I may start feeling anxious at lunchtime whether lettuce is on the menu or not.

Anxiety has an adaptive value though according to Drive Theory. It might get us to up our game when under pressure, the anxious chemical cocktail released when we apprehend a challenge (adrenaline + cortisol, with a dash of dopamine) stoking up the excitatory potential of our response.

At this point, you’re no maybe thinking: hang on, it’s not the ten plagues of Egypt is it, it’s lettuce! Relax.

Perhaps you are able to take this stance because other people’s anxiety is invariably never as pressing, interesting, or tormenting as our own. You might have a whole garden full of lettuce slowly going to seed, but it doesn’t bother you in the slightest. Maybe you even get a kick out of there being such an abundance of lettuce leave for you to choose from, selecting only the finest dozen or so to add to your daily salad, letting the others bolt away without a second thought about wastage.

You are perhaps to lettuce what Henry Thoreau was to his beans, planting seven miles of the legumes, the more the better, not driven in any way (he claims) to plant these in order to feed himself or others, but rather from an almost abstract desire to create a legumous ground cover (“to make the earth say beans instead of earth”) and to hell with man-made, utilitarian notions of trade and consumption: “The crop of English hay is carefully weighed, the moisture calculated, the silicates and potash; but in all dells and pondholes in the woods and pastures and swamps grows a rich and various crop only unreaped by man.”

Perhaps this is also because you and Thoreau have lower levels of trait anxiety (anxiety as a embedded aspect of one’s personality and nervous system wiring) than me. This in contrast to “state anxiety”, of which no one is immune: death, divorce, imprisonment, personal injury or illness, rejection. But even here, we do seem to vary in the resilience of our responses.

So what to do about this lettuce anxiety?

There are three strategies that I find helpful with this kind of anxiety, and they seem to work on non-lettuce issues as well.

If the lettuce is constantly hooking our attention with its Simple Minds anthems, we try to meet the din with a different tune, an alternative ditty. One in which the lyrics cut into the lettuce dirge with alternative formulations.

Perhaps for the first verse, the message needs to go: I planted you lettuce, fleck of a seed you once were. And yes, you may have grown to fill a salad bowl, but if the essence of you, that seed, had fallen to the floor or not taken, it wouldn’t have worried me then, so why now?

Chorus: whether you pass through human or animal guts and intestines, or go straight into the garden waste recycling bin, it’s all the same, lettuce. Seed to compost, with some nutritional munching (thank you) by insects, animals, and humans on the way.

Sometimes, but not always, we can do something constructive to help us reduce our anxiety. So in some ways I’ve got the lettuce to thank for finally get my act into gear with composting bins. If unused salad can be turned into a steaming, dark-chocolatey brown, nutrient-rich material to use all through the garden for fertilizing and loosening the dense clayey soil, then anxiety could be seen as a form of internal conjuring leading to this external alchemy of turning bolted, bitter lettuce into black gold.

Sometimes we can’t think our way entirely out of our anxiety, or change our external environment to turn a threat into an opportunity. At this point we might try and find some kind and accommodating space in our heads for jittery, squally anxiety, as we would for a child frightened by a nightmare. If the reformulation and the “doing” doesn’t entirely put us at ease, maybe then, we need to turn to the task of self-soothing, and calming.

One nice idea is that the lettuce itself is trying to help out with this at the very moment in which it bolts and releases its milky lactucarium. It was once thought to have soporific or analgesic qualities, perhaps because of the similar smell and look of bolted lettuce sap to “milk” of opium poppies.

So John Evelyn, writing in the 18th century recommended lettuce for its “soporiferous quality….which is to Cool and Refresh … besides the effect it has upon the Morals, Temperance and Chastity.”

And even now on 21st century websites like rollitup.org and grasscity.com, forum members like ToKeDAILY in a thread under Hallucinatory Substances praises this “backyard treasure” for producing an “opiate like effect for 15-20 minutes”. The science doesn’t really back him up on this, but I like the idea of using the anxiety-provoker as its very own antidote.

And once the lettuce has finally bolted and is completely inedible, it does become a very pretty ornamental, does it not? Sometimes the best way to banish anxiety is to find something you can enjoy about it.