By Steve Wasserman On August 21, 2016 · In Boredom, FOMO, Mindfulness, Nature, Things My Garden Has Taught Me 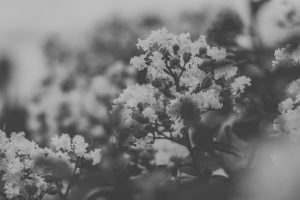 It’s about ten to ten in the evening and I’m standing in semi-darkness beating out the rhythm to a Jose Gonzalez song on the stone path with a piece of bamboo, eyes transfixed by a white spray of tiny flowers glinting out of the darkness like sequins on a velvety black evening dress.

“Achillea ptarmica, I whisper, ‘The Pearl’”, AKA sneezewort, a moniker that doesn’t fit this moment or this plant, blearing all associations of jewellery to images of runny noses and slow-mo videos made by the Department of Health showing fluey folk shpritzing and spouting gobs and splashes of light-refracting mucous out of their mouths and noses.

So I repeat the botanical latin in a liturgical spirit along with the mantra ‘The Pearl, the Pearl!’ so as to get me back to my romantic vision of a pirate’s chest flung open, and dozens of perfect white orbs spilling out from the darkness, shimmering softly and silkily with a kind of tenderness that the bling of gold can never replicate. You might say that this represents the moment in which I finally “get” white.

I also get the realisation, nearing the end of this growing season, that I have far too little white in my garden.

There’s the aforesaid  clusters of Achillea ptarmica of course, and near them a single majestic scabious caucasia perfecta ‘Alba’ which has taken forever to flower, and now that it has, its single bloom after 24 hours is already looking somewhat rusty around the edges.

Also coralesque, fuzzy foliaged Jacobea maritime which I would never have bought in a nursery, but found it whilst skipdiving outside B&Q and have grown to love it’s silver and grey pinnate leaves, as if Miss Haversham were to be crossed with a fern. The closer you are to it, the more white it becomes, especially on its newly emerging stems where there’s no green yet to be found beneath the chalky tomentum.

Others chinks of white in the garden: a singular specimen of the delightful Tiarella wheryi, whose very name evokes a kind of dervish whirl of gauzy, sometimes pink-tinged, tiny spires of white, and a couple of lolling Alstromerias.

Also a dormouse mat of Sweet Alyssum under the Crocosmia, not the ‘Carpet of Snow’ pictures you see on Google Images however, as I’ve planted too few together.

Here and there too, white foliar accents: along the edges of pineapple mint (Mentha suaveolens ‘Variegata’ ), through hostas, and phormiums, the ivy and euonymous shrubbery.

But if you were to walk around the garden without me pointing these out to you, you’d struggle to find much white, perhaps because as a novice gardener, I have been planting for the last two years with the unacknowledged dictum that when it comes to white, there’s no there there. Give a child a set of crayons or felt-tips and ask her to draw a flower garden, and you won’t find a single white bloom rendered on the page. Perhaps this is because children have already imbibed the contentions of adults like Christopher Lloyd who notes with his usual diverting peevishness in Colour for Adventurous Gardeners that white flowers are “a great burden of unsullied purity…cold, staring and assertive, [they] draw your eye, but make you wish it hadn’t.” But even he, filling the beds at Dixter with globes of white agapanthus, white Japanese anemones, and a flower that really does look like it’s staring back at you, ‘Pheasant’s eye’, Narcissus poeticus var. recurvus, must have experienced these magical, quasi-mystical ravishing rushes of white too, often towards the end of the day, or at night. And at that moment may also have found the idea of a White Garden similar to Vita’s at Sissinghurst or Monty Don’s “Writing Garden” at Longmeadow, an enticing one.

Blankness is embedded in the word white (blanco, bianco), but optically white draws anything but a blank. It is rather where all three colour-sensitive cone cells in the eye are stimulated in equal amounts. White is the nothing of everything.

Newton famously deconstructed the white light of the sun “shining in a dark Chamber thorough a little round hole in the Window-shut” refracted by a prism, “to cast his coloured Image upon that opposite Wall”. Leonardo Da Vinci reminds us that white is “the first” colour, as “painting is but an effect of light and shade. White first, then yellow, green, blue and finally black.” And probably everything we know of now began white, these words on the creamy-white Muji notebook page, the greyish white of your screen, semen-white, the writer once, and aeons before him that big white bang. So really, everything, everything.

“I’m so bored,” says my teenage neighbour rattling around his summer holiday of 2015. “I’m just so booooored,” he repeats, as if I hadn’t heard him the first time. I am usually doing something in my garden when he updates me on his unchanging state of stultifying boredom. He does this whilst watching me ever-occupied, politely declining any of my suggestions to muck in with some weeding or take on a horticultural project in his own garden.

Instead, between bouts of aimless, dithering boredom, he reads the odd dystopian novel and plays lots and lots of Agar.io in his bedroom. This is an MMO (Massively Multiplayer Online game) wherein his job is to manoeuvres himself, a tiny (red) cellular organism, around a blank white grid that looks like a page of a math’s exercise book, whilst attempting to eat smaller vari-coloured organisms and avoid being gobbled up by larger ones. Most, if not all of these organisms are controlled by other bored teenage boys and girls playing in Abuja, Bogotá, Copenhagen Djibouti, and every other wired up city in the world. What use gardening to someone taken up by the eat-or-be-eaten dynamics of evolution, he might say? His boredom, the empty, depleting-white blocks in his day, filled during term time by school, homework, and commuting, now by Agar.io.

“If you spin a colour wheel fast enough it turns white,” writes Derek Jarman of the achromatic colour in his book Chroma, “but if you mix the pigments, however much you try, you will only get a dirty grey.”

When I sit for a spot of meditation (20 minutes) at the end of each day, a habit I’m trying to reinstate after having fallen off the mindfulness wagon in the last year or two, I’m aware of my mind spinning liking Jarman’s coloured wheel. The white-trance that settles over us in meditation, as we anchor the spinning mind on the stave of breath, can often feel soft and peaceful, like a musky white rose (rambling Long John Silver is one I fell in love with recently visiting the Royal National Rose Society in Hertfordshire). But it can also feel like the white blur of a too-fast pendulum ride at the funfair. The trick is to stay with the breath. Coming back to breath takes us back to that aah-sense of white. And often a recognition that I need more of this in my life/garden.

If I don’t meditate for a while, I forget how peaceful this white trance can be. For some reason, like our sometimes over-colourful gardens we seem to want to desperately stay with our pigment mix rather than giving ourselves the time we need to reset and rebalance the mind (and eyes) with white.

Why do we fight white so? Perhaps it’s the fear of nothingness, the denial of death, that Ernest Becker writes about in the book of that title, that scares us, that seems to impinge on the conflicting desire to play our colourful (look at me!) part in the “theatre of heroism”, William James’s term for our “common instinct for reality”.

Symbolically, going white, even for 20 minutes a day, feeds into the modern disease of FOMO (Fear of Missing Out), for god forbid we might miss or forego a moment of colour, a colourful thought or taste or sight. We seem to forget over and over again that pictures look their most beautiful with a thick white mount taking up 20% of the frame, or that a cool glass of water when we’re thirsty is the most delicious and satisfying drink in the world. So we perhaps need to be reminded of this truth over and over again too. Writing it here for myself now is one way of doing this.

White, I’m coming round to see after a few years of avoiding it, creates an essential optical as well as experiential break, a pause between one patch of colour and the next, and like other white pauses (boredom, meditation) is something I’m drawn to cherish and make space for, until pulled away by the next colourful bloom.