By Steve Wasserman On September 15, 2016 · In Boredom, Feel Better, Hedonic Adaptation, Mindfulness, Mood, Nature, Things My Garden Has Taught Me 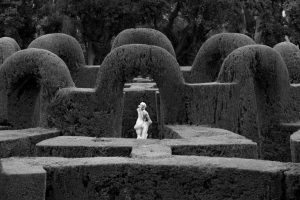 The other white in the garden, if white often registers for us as achromatic, or a no-thing, is green. Green is the the frame which supports and surrounds the star attraction. Seed packets pay scant pictorial attention to a flowering plant’s foliage, even though it’s the foliage we see as we wait for the culminating bloom. It is also foliage that remains after the flowers have died away. For when we buy a packet of seeds, we’re generally getting much more foliage than flower, and yet this is never acknowledged or accounted for.

Equally our lives are made up of foliage: eating, drinking, sleeping, grooming, defecating, going to the supermarket, listening to the radio, drinking cups of tea. The quotidian which surrounds us like long, undifferentiated stretches of lawn or box hedging, generally unnoticed and taken for granted until ill-health, poverty or a disability hinders our access to them.

At times these experiences are even despised with the familiarity that breeds contempt. Most morning I get up to do my green-washing-up, my green-stretching, followed by a green lope around the green block, past driveways and the odd plant or tree, all green-unseen. The same unvarying green sights, adding up quite often to a feeling of a green oppressiveness. The oppressiveness of a green Groundhog Day.

If we’re not careful, everything can become Groundhog Day foliage after a while, including the flowers themselves. Every flower we wait for in the garden, and feel thrilled when it finally arrives, soon, like the foliage surrounding it, becomes just another green-given which a few days later we will walk past, hardly noticing it anymore.

Likewise our flowers of experience (exciting new relationships, jobs, and holiday destinations), and our flowers of consumption: the diminishing pleasure of that second, third, fourth bite of cake; the consumer goods we long for and finally buy only to lie forgotten in drawers and cupboards as we move onto the next desired object. All capitulate to unseen-green at some point.

The fancy term for this phenomenon is “hedonic adaptation”. Hedonic adaptation is the process by which we automatically habituate to experiences or states, both good and bad. Any novel stimulus, once it becomes a constant, fades into the background of consciousness so that our mental resources can deal with new stimuli. In this way, psychologist Ed Diener (and many before him, including ancient Greek and Chinese sages, also the Buddha) would argue that happiness or sadness largely “reflects changes in circumstances rather than the overall desirability of the circumstances themselves”.

Each of us, it would seem, has a hedonic (happiness) set-point, which acts like a Mood Thermostat, returning us to our particular green state, no matter what colourful spikes of “positive” emotions -joy, trust, interest, distraction- come our way. Likewise with the more gloomy, destabilising effects of “negative” emotions like anger, disgust, sadness, and apprehension. Forty percent of this calibration appears to be dictated by genetic inheritance, 20% by the environment, leaving us about 30-40% to play around with in therapy or other self-care strategies.

Before 20th century therapies, this existential sustenance and assistance came through spiritual disciplines, which have always used the foliage, the quotidian, as part of their core practices. You will notice if you go on a Buddhist retreat that 95% of the practice is foliage (sitting with breath, mindful walking/cleaning/gardening), the other 5% being meals and the odd dharma talk, which punctuates the day like flowers, but in time, becomes even more foliage.

And yet everyone who does these retreats will attest to the fact that it is in the foliage where one usually experiences the most memorable and sustaining moments of serenity. Also: lots of boredom, frustration, and distracted mind-wandering. But foliage is where it’s at we come to discover when we start to pay careful attention to the stuff.

So is to these practices that 21st century psychology has been looking in the last couple of decades in a bid to try and close the gap between our hedonic set-point, particularly if set relatively low (resulting in states we call depression and anxiety), and a more optimal setting.

The idea of mindfulness has become a mainstream phenomenon, and so paradoxically is also becoming part of the unseen-green of mental health foliage after a few years of floriferous attention. Our plugged in environment continues to tell us that ever greater stimulation and variety is the answer. Speed up our hedonic input, and while you’re at it, add a bucket list to the equation. More choice, more distractions, more tastes, sights, sounds; stimulation to the max.

Yet our ancient brains don’t deal very well with the kind of attentional switching we demand of them in front of our screens and plugged into our gadgets, resulting in a state familiar to all of us distracted multi-taskers: a fuzzy-headed, stressful feeling of cognitive and sensory overload.

One doesn’t always need the internet to produce this state. Galleries are very good at bringing on this feeling in me too. And a few weeks ago on a visit to Great Dixter, after an hour of walking around the lavishly planted gardens, I suddenly yearned for a foliage-reset, choosing to sit and eat my sandwiches not before the long border stuffed with cannas, dahlias, and ‘Mighty Atom’ Delphiniums but rather down by the Lower Moat where attention-grabbing texture and colour is kept to an absolute minimum.

Twenty minutes later, worn-out neural circuits rested, I was able to return to the floral divas and prima donnas of the flower beds.

So with this in mind, here are my three favourite embrace-the-foliage practices:

A poor life this, if full of care, we have no time to stand and stare, wrote the Welsh poet W.H.Davies at the start of the last century in which standing and staring would be pretty much sidelined until the 60s. The standing and staring he had in mind was not the kind we do in front of a painting, but rather the sort of day-dreaming, mind-wandering, beneath-the-boughs attention we might give to the foliage around us in a bid to see it afresh.

A similar exercise to the one Jon Kabat-Zinn and all who have followed on the mindfulness path kicks off his 8-week MBSR and MBCT courses, investing careful and curious attention for ten minutes or more in the humble raisin. I’d recommend a leaf or the the foliage of a plant in your garden, maybe choosing something you hardly ever look at, or pass without a second glance. Stop, sit/stand, and begin to take in the different shades of green at play in one leaf, or in leaf and stem, the texture of the plant, the intimacy of touching, humanskin to plantskin, its aliveness here and now corresponding in some wordless way with yours. This can be done with any of the foliage that surrounds us, including people, and is an exercise that I often suggest in my work as a couples, but turning instead to the foliage of each other.

I’m always surprised what happens when I turn my grumbling mind to gratitude.

I’ll sometimes try this on a walk around the brick and concrete uniformity of my suburban environment. The mind, with its negativity bias, is wont to grouch and grouse about how lifeless, dull, and car-enslaved every driveway seems (and for the most part is) as opposed to the cottage garden vigour of my front patch full of runner beans, tomatoes, flowers and shrubs. This invariably lowers my mood and makes me feel ill-disposed towards my neighbours.

But even a few minutes spent being thankful for the odd rose bush dotted here and there, or a random verbena bonariensis poking its spindly Giacometti-like limbs above a crushed can of Special Brew helps me to feel less knotted up and angry.

This gratitude practice is a great accompaniment to Stopping and Staring, as we bring curiosity and fresh eyeballs to the unseen-green of petunia-filled hanging baskets, and the uncultivated Asters growing as “weeds” from cracks in the pavement. Or tip our hats fondly at the fading hydrangea bushes so beloved of suburban driveways, keeping company with a skip or Ford Mondeo, bringing some gentle colour to their monochromatic surroundings. It ain’t Kew, but it still is nature poking and growing its way around, through and out of corners of this concrete landscape. To attempt some conscious appreciation of this, as Robert Emmons has shown in his decades of evidence-based research into the effects of gratitude on our hearts and minds, increases well being.

It really does. Try it.

A natural response to finding our foliage stultifying is to want to be somewhere else, surrounded by someone else’s foliage, hoping this might even turn us into someone else.

I imagine Monty Don at Longmeadow in Herefordshire (“one of the most rural and sparsely populated [counties] in England”), and the kind of strolls he probably takes, not believing for a second in this moment of envy that Montague too has a hedonic setpoint, and so is not immune to low moods, to foliage flatness, fretfulness, and fatigue. As we all are.

But Envious Me, Deficient-By-Comparison Me, can only imagine Monty, or Carol, or Joe and their perfect gardens/lives as presented by BBC2 on a Friday night. Monty’s perfect walks, Monty’s perfect dinners, Monty’s perfect pets, Monty’s flowers, flowers, in colorist-tweaked High Definition resplendance, with not a sodding piece of foliage in sight. Held up next to the imperfections of our own gardens, walks, dinners, relationships, these media-embellished versions of other people’s lives are invariably going to make us feel pretty glum. So better not to indulge ourselves in these comparisons if we can.

Instead, here are some suggestions from Sonja Lyubomirsky for dealing with that ruminating, Social Comparing part of us: