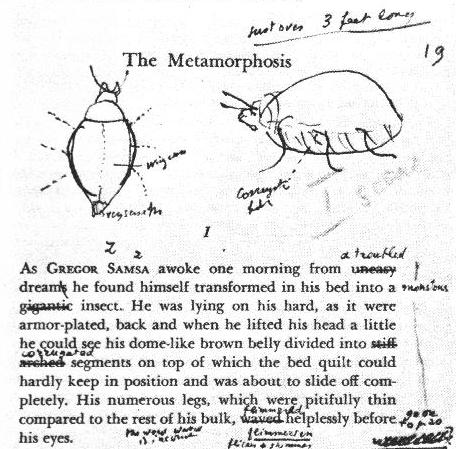 Vladimir Nabokov’s drawing of Kafka’s beetle, drawn in the teaching copy of his Metamorphosis

Every morning I get out of bed, lie down on my yoga mat in a kind of upended beetle pose – the Gregor Samsa pose is how I like to think of it, although I believe the formal term for this pose is Pavanamuktāsana.

When I did Bikram Yoga, now known predominantly as Hot Yoga since founder Bikram was outed as a rapist, we were told whilst doing the pose, not that we needed reminding as our bodies were complying regardless, that Pavanamuktāsana translated as Wind Removing Pose. The farty-pose in other words. Not arty-farty, just farty.

So whilst putting my body into a farty Kafka-homage yoga pose, I bring to mind the following words attributed to Virgil: “Death whispers in my ear, / Live now, for I am coming.”

Why these two lines, rather than any other? I have since discovered that these two lines of verse were probably not written by Virgil, but someone else whose name hasn’t travelled the two thousand years of reading and writing that separates us.

I guess these words are a kind of prayer for me. If prayer means “a reminder to ourselves and to others to live wisely”, which I believe it does. Another word for these lines, even though they are shorter than the shortest haiku, is “poem”. What is a poem? Kaveh Akbar, quoting Mary Leader, gives this very inclusive, but somewhat dry definition: “A poem is a thing.”

I would like to suggest my own definition for a poem, which also perhaps explains why this poem is the first poem I recite by heart every morning, the first in my Poetry Liturgy (62 poems, and counting, learnt by heart and recited on a daily, or at the very least weekly basis). My definition for a poem goes more like this: “A poem is a series of words which move me, excite me, and challenge me in some way. A life koan: words I want to meditate on, interrogate myself through, and have close to me at all times.” 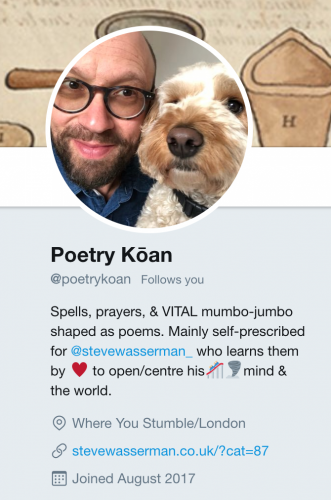 And the only way I know for doing this, is to have these 62, and counting, poetry koans living and breathing through my living breathing brain and heart. It takes time to do this. It takes me about a week or two to learn even a very short poem by heart (I don’t have a good memory), and then the rest of my life to keep them alive in my consciousness. This kind of poetry you could say is the ultimate existential-literary Tamagotchi!

Described in this way, the process sounds a tad insane. Just as insane as some of the religious practices carried out by the tribe I was born into. Practices I no longer follow. My uncle, to this day, binds two leather boxes, one to his forehead and another to his arm, containing some kind of Biblical verse (poetry?) and then recites other prayers to his God, in a language neither he nor I speak, prayers to a God who comes across in the Old Testament like an omniscient, omnipresent and omnipotent Donald Trump. That’s why I don’t pray to that God.

My Uncle also only eats food that has been blessed by an elder of the tribe: food that costs him twice as much as anything else on the supermarket shelves, and is, in my opinion, not as tasty as the unblessed foods. But he does all this because these social and spiritual practices enrich his life and give it meaning. Learning poems by heart and keeping them alive through self-recital works in a similar way for me.

What I’d like to explore in the following posts, one for each poem I have learnt by heart (I’m aiming to get to 100 before I turn 50) is how and why this enriching process works. Poetry is not about hows and whys, which is partly what makes it so wonderful. Why is one poem better than another poem? Forget everything you’ve ever learnt at school. The simple answer: because that one speaks to you more than another does. That’s what’s so cool about poems. But as human beings, we yearn for coherence and orientation, we like to know how and why a certain kind of practice works. So let me tell you how and why, in the hope that this might convince you to give learning poems by heart a space in your own life. Especially if you’re in the position of lacking some path or purpose. These are times in our lives when we are ready for something new, which can also be something very old, like prayer. Or poetry.

If poems-by-heart is my “religion”, I’m sort of  bound to start behaving like any other believer, which is to say evangelically. So let me put that out on the table right from the start. Apart from sharing with you the 100 poems that have made a profound difference to the way I live my life, I’m also going to set about trying to convince you to start creating your own Poetry Liturgy: which is to say, learning some poems that speak to you in a profound way. Even if you start, as I did with just two lines, eleven words, thirteen syllables.

A personal poetry liturgy is not an anthology of poems that sits on your bookshelf and is consulted every now and then. We all have those, and those are great, but when life gets really really hard, as invariably it does at times, those poetry anthologies are not much use to us. Whereas the living, breathing poem often comes to my rescue. And sometimes on a daily basis. Eleven words that set the compass for my that day, and perhaps for my life.

Do you have eleven words that do something as profound as that for you?