PAIN + LANGUAGE = SUFFERING? DE-FUSING: 5 Methods That Can Help You Unhook from Your Not-Good-Enough Script (Or ANY Painful Mind Script For That Matter!)

At the moment, I wake up to jackhammers and drills.

Not just the usual jackhammers and drills of my own thought curves and mental convolutions, supplied by that sometimes-not-so-kind, maybe even Totally Loopy Word Machine we call the mind. But also “real” noise, and lots of it, from the builders next door who are probably going to be around for the next couple of months (!!), completely refurbishing and extending 109 Ruskin Gardens.

I’d been warned, I knew it was coming, and have got the owner of 109, Mr Patel to graciously agree to keep the work relatively quiet when I’m seeing clients. But at all other times,  the gloves (or in this case, the jackhammers, drills, power-saws, etc) are off. Which is to say “on”. All the time.

Already I can feel the effect of all that banging and the drilling on my nervous system, and partly in response to this, am trying to re-engage with a mindfulness practice: mindfulness being all about working on our willingness to “be with” upsetting thoughts, memories, body sensations, and external irritants. Especially those we have limited or no control over.

I’ve also been finding a great deal of solace in a fork. A conceptual fork. Though in sessions, I’ll occasionally rush into the kitchen to grab a real fork in order to explain the concept to someone else.

This conceptual fork, sometimes called The Stoic Fork, is designed to get us to reflect on control, as well as the relinquishing of it. If you’re anything like me, control is important to you. It helps you to feel like you have agency, and choice, and most importantly “a say” in what happens in your life.  And yes, control is important. One understanding of depression is that it proceeds from a misperception that we have no control over our lives whatsoever, that whatever we’re struggling with is so difficult and burdensome and entrenched, that we will never, ever, ever get a handle on it. Understandably that can be something of a buzzkill (to say the least). 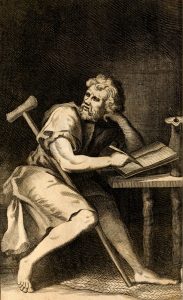 We need to skilfully differentiate between what is in our power and what is not. And that very differentiation happens to be the first thing we read about in a book of collected discourses issuing from the lips and the mind of a crippled, Roman slave named Epictetus who lived 2000 years ago. I like to imagine him as a slightly more philosophical and Latin-spouting version of Tim Renkow’s lovably, cheeky character in his new sitcom Jerk (if you haven’t seen it, do!).

Here’s a little experiment for you to try out before I explain the fork.

Think of something that’s getting you down at the moment. It could be anything: a physical ailment, a relationship issue, a problem at work, a crass comment someone made recently in your presence, something unsettling you’ve seen or read, or even six dudes banging and hammering and drilling all day long right next to where you’re sitting trying to capture the evergreen wisdom of Epictetus 😉

Make a mental or actual note of this thing, this thing that’s irking you. Now imagine me whipping out my IKEA fork (see drawing below) and asking you, as Epictetus might have done to another slave as they laboured from dusk to dawn on a Roman building site: “How much control do you have over this person/thing/situation/noise that’s upsetting or worrying you?”

Be warned! This is a trick-question. If you’re anything like me, you might say this in response: “Well not much, not as much as I’d like, but….”

“Don’t lecture me on control. Control has got nothing to do with this. Or if it does, it’s because that person/thing/situation is out of control and they’re driving me craaaaaaazy.”

To which I imagine Epictetus using his walking stick to draw a line in the sand showing the following “fork”. 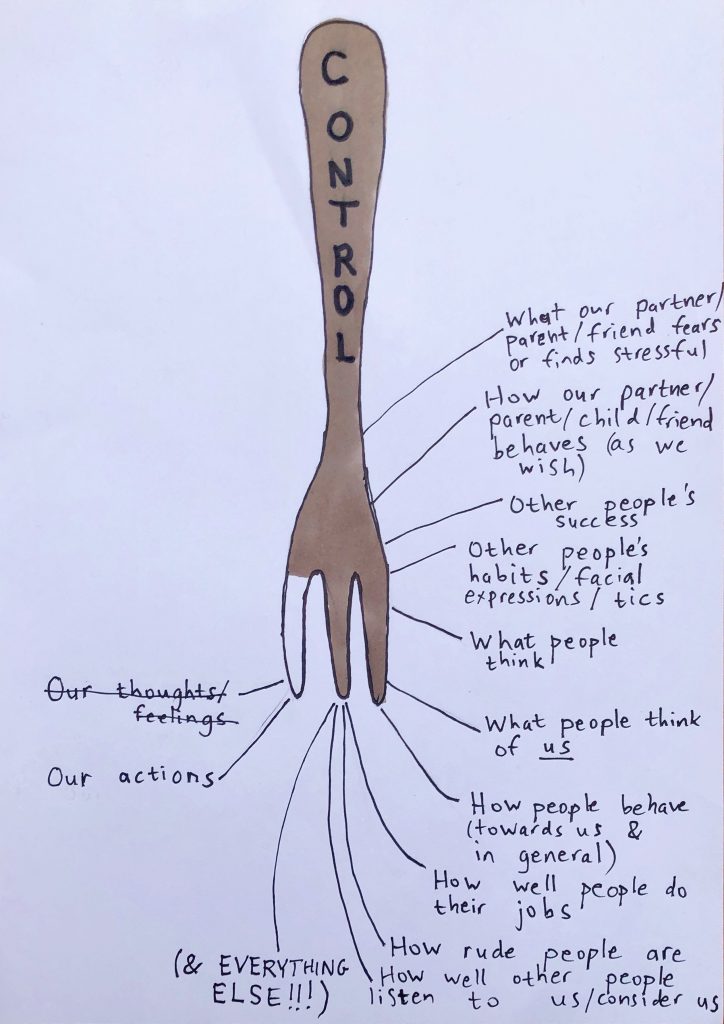 As you can see, on the right he’s written the kind of things we sometimes believe or think (maybe not always consciously) that we can control, especially with regard to other people: what other people think what they say, how they act around us. But equally this works with any phenomenon in the outside world, or the inside world (our thoughts, feelings, body sensations, urges, memories). I have no control over whether my stomach might decide to translate my anxieties and worries into an unpleasant, nauseous sensation, or if my head might suddenly begin to ache, or feel tired and woozy.

Epictetus believed that the only thing we have any control over are thoughts/feeling, and our actions. As you can see in the picture above, I’ve gone and crossed out THOUGHTS & FEELINGS because although he was an incredibly wise man, and although many of his thoughts and theories have formed the bedrock of our modern psychotherapy and psychology practices, we also know now, that thoughts and feelings, just like body sensations, memories, and urges cannot be controlled!

I can no longer control what thought is going to flit into my mind in the next minute than I can control what tweet Donald Trump is going to send out to his 60 million followers in the next hour. In fact, modern psychology has shown that the more we try and control our thoughts, feelings, urges, and memories, the more persistently they surface to assail us. It’s a bit like a government trying to ban a “naughty” or “insiduous” book or film (Lady Chatterley’s anyone, A Clockwork Orange?): as soon as people catch wind that now they’re not “allowed” to read that book, or watch that film, that’s the only thing you then want to do. Our minds seem to work according to similar dynamics.

If this is so, then we need to keep on reminding ourselves in some way, that the one and only thing we have any control over whatsoever, is our behaviour: our actions, our words, the things we write and say, and do. That’s it. That’s all we have. And that’s a lot!

Want to feel more in control? Control, in a healthy-ish, skillful-ish way your actions. As we know, there are lots of unhealthy ways to control our actions: starving ourselves (eating disorders) or overeating; exerting or harming our bodies so as to distract or focus our attention away from our pain; limiting our interactions with people we might enjoy being with in order to keep ourselves safe. So as with anything, a mindful approach is best when it comes to our actions. But always with the notion that, apart from what we say and do and write, we’re not in the driver’s seat of any shared inter-action (with another person or the world), and never will be.

How does one then apply this wisdom? I find it helpful to use the fork as a kind of reminder or mantra when I find myself getting irked by someone else’s behaviour. Let’s say a friend or a loved one does or says something that triggers me in some way, so that my knee-jerk response is one of the following:

This list might stretch to infinity, as infinite are the ways in which our minds proliferate suffering on the back of a perceived threat or hurt. At this point, if I’m quick enough to catch the panicky or angry thought, I might inwardly try and shrug my shoulders, call to my mind the image of that stoic fork and go:

“ I have no control over this person/situation/thing. Let it go.”

“Not my circus, not my monkeys!” (or if you prefer the original Polish version of this expression  “nie mój cyrk, nie moje małpy” [pronunciation here])

I might follow this with an attempt at a kind of rueful smile here, which can also sometimes help, particularly if it replaces the expression on my face at that moment which is likely to be a glowering or grimacing one.

It’s a simple practice, but I find it quite a powerful, especially when used in the midst of interacting with other human beings who are invariably going to be saying or doing things we wish we could control, but acknowledge we can’t. And even it allows us to be a little bit more flexible and kind with ourselves as well as with each other, we’re onto a winner. 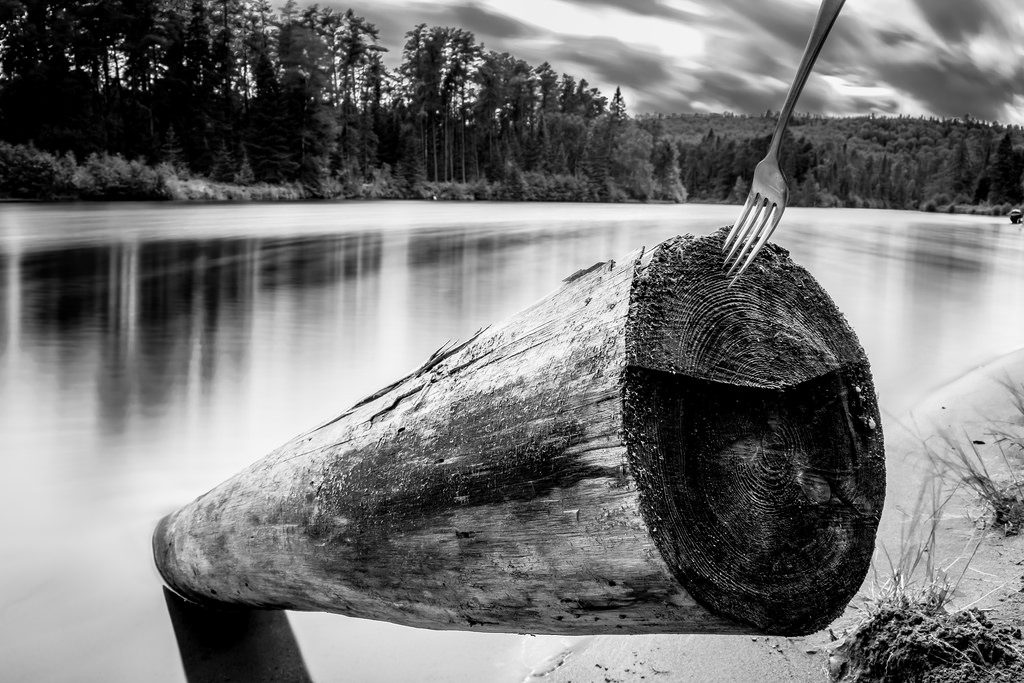