The Clenched Fist of “NO!” – Deprivation, Abundance, Gratitude Feel Better 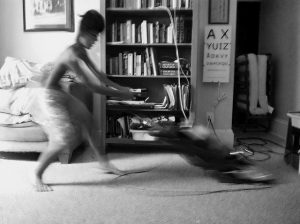 I am listening to the CBC podcast Uncover about a self-help cult called NXIVM (pronounced Nexium) whilst doing a few hours of housework.

I’ve been off for a week and so have reverted to slob mode in the interim. The dishes are washed, but things are scattered about the apartment, books and papers piled high, the floors dusty. Whenever I do a deep clean (dusting, sweeping, mopping floors, wiping down all surfaces, returning discarded objects to where they belong) I remind myself how the simplest Feel-Better activities are often also the most powerful. There is a reason why everyday, in the 100s of buddhist temples in the world, a codified system is strictly followed in relation to cleaning, where for a period of time each morning, the inhabitants of these communities sweep, scrub, scour and polish as if their lives depended on it.

As Shoukei Matsumoto explains in his Monk’s Guide to a Clean House and Mind (a Feel Better Bestseller): Zen buddhist practice understands that “cleaning isn’t just about removing dirt”, it’s also linked to “cultivating the mind.”  In fact, it is so ingrained in the culture that Japanese schoolchildren have daily osouji jikan (お掃除時間), which is to say “cleaning time” sessions combining a kind of Downward Facing Dog yoga position with a wet cloth in hand in order to accomplish what I try to achieve with a floor mop.

What this dual cultivation of mind and one’s surroundings might mean is explained in a story about Lamchungpa, recounted by the First Dalai Lama. Lamchungpa wasn’t the quickest of students and struggled to assimilate the sometimes arcane philosophies and practices of his teacher, so Siddhartha instructed him to simply clean the other monk’s sandals and to repeat these two phrases whenever he did so: “Dust gone, kleshas (which is to say: negative emotions, mental hindrances) gone.”

It is said that even this mantra was a challenge for him to memorise. As with all of these fables, whether Lamchungpa [1] existed or not is neither here nor there, he exists as a kind of Wisdom Meme reminding us that the simplest teachings are as slippery to hold onto as the most complex ones. If brushing my teeth was not an automated as a habit for me, I wouldn’t do it on a daily basis. The same goes for lots of feel-better activities.

As for Lamchungpa, the sandal-cleaning activity and accompanying mantra worked their spell over time , and he was able to notice that the removal of dust off external objects, correlates psychically with some of the mental grime clogging our minds and getting in the way of us experiencing joy and well-being.

Buddhists categorise these mental hinderances as follows: sensory attachment and clinging, ill-will, sloth-and-torpor, restlessness-worry, and doubt. Seeing them for what they are, as hinderances that get in the way of well-being, helped Lamchungpa feel better.

Mythologically speaking, the sandal-cleaning practice took him to a Bona Fide Enlightenment, which is supposedly a step or two above just-feeling-better. For me though, and maybe for you, feeling better, just feeling ok as you go about your business on any given day, is plenty to be getting on with for now. I’m really not in the Englightenment Business, which has always struck me as a bit of a humblebrag, at best, and a big-dick-brag at worst.

Back to the podcast. The interesting thing about cults is that often the philosophies that underscore them are inherently sensible, and wise. Here’s one of the key philosophies of NXIVM described on the podcast by one of its members:

“Most people go around blaming their feelings on other people. ‘You made me feel this way!’ [NXIVM] takes a complete reverse stance on that. There may have been that trigger, but you created the feeling, you gave it meaning.”

And the second key philosophy is that our thinking and belief system is full of cognitive distortions. “The thing that stands in the way the most about our reproducibility are people’s own issues, and their own beliefs,” explains founder and alleged sex-traffiker Keith Raniere. “If I believe that I can’t run a mile in a certain time, I can almost always prove myself correct. Most of us can prove our limiting beliefs are correct.”

NXIVM’s feel-better response is something they call Rational Enquiry, which the presenter of the podcast, Josh Bloch, describes as a “a self-help system created by a car mechanic. All you have to do is open the hood, change some wiring, tighten the screw, and you’re good to go.”

Even though Raniere has, as befitting the narcissistic profile of a cult leader, filed a patent for this so-called “innovation in human technology”, Rational Enquiry as a form of vehicle/human maintenance has been around forever, at least since the Greek Stoics of the 3rd Century BC, right up to the behavioural therapies of Watson and Skinner in the 20th Century, which merged with Ellis and Beck’s cognitive approach to give us CBT.

As with any feel-better school, NXIVM has integrated a whole mishmash of psychologies into its incredibly expensive Pyramid Scheme courses. Their Exploration of Meaning (EM) technique, also patented, is much more psychoanalytic. When getting an EM you take an issue in your life you have an emotional reaction to, and the instructor asks you a series of questions, which will generally entail tying it into some early-years biographical memory.

So Sarah’s annoyance with her partner Nippy leaving dirty dishes in the sink might (the cult would say most definitely does) relate to her parents’ divorce when she was two and a half, and how they used to fight about dishes before they separated. “What I make dishes mean in my deep structure”, explains Sarah, “is divorce. Dishes cause divorce. What a good facilitator would say is ‘Do you see how the dishes didn’t cause your parents divorce’. So when you unhook the dishes from whatever’s going on, the dishes don’t have that meaning in reality.”

Sarah feels better and less triggered by Nippy’s dirty dishes in the months that follow that intervention, but is she feeling better because of this classic psychoanalytic move (making the unconscious conscious), or something else? Let us not forget, that when psychoanalysts first set up shop in America at the beginning of the 20th Century, they did so next door to the palm readers and spiritualists: because they were the NXIVM of their day. And perhaps still are if you consider the financial bar set to enter the profession (3-5 sessions of training analysis per week costing anything between £600-1000 per month, as well as five to ten grand in terms of courses). Another NXIVM/psychoanalysis overlap: both cling to a  highly exclusive, reactionary, and authoritarian ideological system which brooks very little argument with or interrogation of its methods and dogma. Also, the founder of the cult (Freud, Raniere) is treated with the respect and reverence more often associated with royalty. I like self-help that costs nowt but time and energy to employ, and doesn’t demand the worship of gurus, and cleaning certainly fits this bill.

THE FB TAKE-AWAY (for me, but you’re welcome to give these tips a try too):

Take the cleaning of windows, of spectacles, of mirrors, and of television/phone/computer screens very seriously. How often (in fact right now!) am I typing on my laptop with a grungy screen whilst looking through specs covered in grime and dandruff.

Other than household objects, these surfaces are the closest we perhaps get to interacting with the surface of our minds (which for most of us is Google). Cleaning these surfaces is as good as rinsing one’s eyeballs, if that were possible.

Maybe also use a dedicated cleaning liquid for the purpose (sorry Steve, but shampooing your specs in the shower doesn’t really do it)? Whilst writing this letter, I stocked up on Windowlene and microfiber cleaning cloths, which seem to work really well on both screens as well as specs .

And maybe even think about employing some version of Lamchungpa’s mantra whilst cleaning? “Dust gone, [whatever’s bothering you] begone too!”