By Steve Wasserman On October 2, 2016 · In Feel Better, Max, Nature, Self-care, Things My Garden Has Taught Me 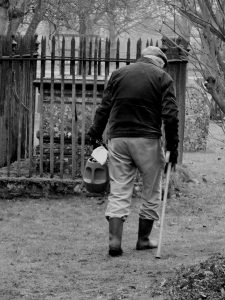 If you don’t water your plants carefully and consistently, especially those not embedded in earth, but exiled in pots and planters, they’ll soon let you know, becoming pallid, etiolated husks of their former selves. Take this poor wilty tomatillo plant on the left that greeted me a few mornings back: not a happy camper.

This is the garden’s way of saying to us: “In order to flourish, constant care is what I need. So please, assigned caregiver, try as best you can to develop this habit. For me, but also for you too, for all of us.”

Only the garden gives us such expeditious feedback. If we ignore other valued life projects or goals, they generally don’t let us know they’re on the verge of expiring in the way that plants do.

It’s all about care, plain and simple, from the Latin curare, “to take care of” and cura, “care, concern, trouble”. I am concerned for the fate of my tomatillos, so I take care of them, but they would also have me care proactively, foreseeing their needs and providing accordingly. This is something we all hope our caregivers are able to do. And sometimes they meet our expectations, other times not.

Hyginus, curator/writer of 300 Fabulae round about the first century AD, reminds us that we are all Care (Cura’s) children:

“Once when Care was crossing a river, she saw some clay; she thoughtfully took up a piece and began to shape it. While she was meditating on what she had made, Jupiter came by. Care asked him to give it spirit, and this he gladly granted. But when she wanted her name to be bestowed upon it, he forbade this, and demanded that it be given his name instead. While Care and Jupiter were disputing, Earth arose and desired that her own name be conferred on the creature, since she had furnished it with part of her body. They asked Saturn to be their arbiter, and he made the following decision, which seemed a just one: “Since you, Jupiter, have given its spirit, you shall receive that spirit at its death; and since you, Earth, have given its body, you shall receive its body. But since Care first shaped this creature, she shall possess it as long as it lives. And because there is now a dispute among you as to its name, let it be called homo, for it is made out of humus (earth).”

Taken out of its mythological setting into the realm of developmental psychology, it seems to have been as clear 2000 years ago to this Latin writer living in Roman Spain, as it was to a 19th century Austrian neurologist developing a new theory called psychoanalysis, that we are all shaped, for better or worse by the consistency, suitability, and the particular characteristics of the care given to us.

Of all the mammals, we are for at least 10% of our lifespan (and often, for much more), totally dependent on our care-givers for daily feeding, watering, cleaning, and emotional “sunshine” (play, warmth, touch, social interaction). Without this care, without the consistency of this care (good but intermittent care is almost as depriving as a consistent lack), we struggle to take shape. This may also affect the ways in which we later take on the role, or shun it, of being good-enough caregivers ourselves when required to do so.

We can sometimes idealise self-care, or other forms of care, even sanctify it. Organised religions and self-help books do a good job of this. But care does not always pour forth accompanied by pink marshmallows, crucifixes and ethereal lighting.

Not because I was taking a Flaubertian approach to its construction (‘For entire days I have polished and re-polished a paragraph without accomplishing anything,” Gustave laments in a letter to George Sand. “I feel like weeping at times. You ought to pity me!”), but rather because Cura often requires a variety of practical obligations from us before we can attend to more abstract concerns.

In this case: standing up three or four times to keep Max out of the raised vegetable beds (he’s developed a thing for Mizuna and Mispoona stalks, and is able to detach these with great agility and speed at any given moment); running into the house to find a raw hide chew to keep him busy; another trip to fill his water bowl; responding to a request for a tummy rub; then a can or two of water sprinkled onto the Hardy Annual seed patch which I’d noticed were drying out whilst walking back and forth between house and garden for Max; and a toilet break, for me and him.

These are the daily cares of any gardener, or parent, trying to fit some language production into the cracks and crevices of time between the demands of other activities. A blog might also be seen as a good practice for (constant) cura, growing like the humble, but no less eye-catching Mexican fleabane (Erigeron karvinskianus) in the cracks of walls and pavings, and over the various surfaces of our days.

There is a delicate balance to be found between the benefts of dutiful care, and its misplaced or excessive stablemates. The former positions our own needs as woven into a reciprocal ecosystem of giving and taking. Where, to care for those plants, animals, people around us, is also to care for ourselves. The latter places us in a position where we are so involved in the care of others that we forget or neglect our own needs, downplaying their worth and claims on our time and energies.

A life without care(s) doesn’t seem to work for us either. Look at Adam and Eve, created by a somewhat naïve old testament God, as beneficiaries of a garden rather than caretakers and co-creators. “Deprived of the commitment that drives a gardener to keep his or her garden,” Robert Pogue Harrison writes of this archetypal footloose and carefree couple in his wonderful book Gardens: And Essay On The Human Condition, “it would seem that it was precisely this overprotection on God’s part that caused Adam and Eve to find themselves completely defenseless when it came to the serpent’s blandishments.”

So postlapsarian Adam and Eve become, because they had no choice (a useful obligation we now realize) were forced into becoming carers, placed in an environment that can only be made inhabitable (i.e. human?), by dedicating themselves to their daily labours, to the care of man-made gardens, their offspring, and each other. In this way, Harrison notes, “culture” is born too. For now we are all put in the position to become cultivators and curators, bloggers and producers, rather than just passive consumers, receivers.

But sometimes, as it did for Adam and Eve, as it still does for us, the obligations of care can weight heavily on us. Good to be reminded at these times of the “potential” of this state by writers like Harrison. It appears to be a contract that we avoid at our peril:

“We must not forget that Adam, like homo in the Cura fable, was made out of clay, out of earth, out of humus. It’s doubtful whether any creature made of such matter could ever, in his deeper nature, be at home in a garden where everything is provided. Someone of Adam’s constitution cannot help but hear in the earth a call to self-realization through the activation of care. His need to engage the earth, to make it his place of habitation, if only by submitting himself to its laws—this need would explain why Adam’s sojourn in Eden was at bottom a form of exile and why the expulsion was a form of repatriation.”