Poetry Koan #3: Final Soliloquy of the Interior Paramour by Wallace Stevens Poetry Koan #6: from The Dhammapada by Siddhārtha Gautama

Poetry Koan #5: The Many Wines by Rumi 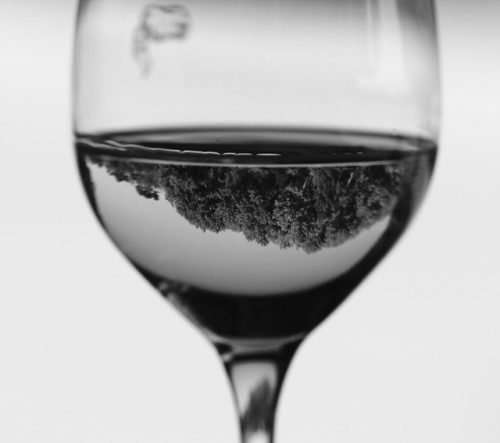 Today we have been given a wine so
dark and so deep that to drink it
would take us beyond these two worlds.

Today we have been given a substance
so sweet that to eat it
would deliver us from self-consciousness.

Today will end once more with sleep
ending thought ending feeling
ending each and every craving.

Today Majnun’s love for Layla
is born and with it a mere
name becomes his salvation.

Every minute of the day we’ve been given
at least fifty ways to cut loose
to just slip out the back Jack.

Don’t think all ecstasies are the same
Jesus was lost in love for his God
his donkey drunk on barley.

Drink from the presence of Self
not from jars or scars or quick fixes
Every vessel is a moment of delight.

As a camel moves when its finally
been untied from its post and
gets to just amble about freely.

I don’t know what you imagine this wine to be when you read this poem by Rumi, but here are seven iterations of the wine for me. 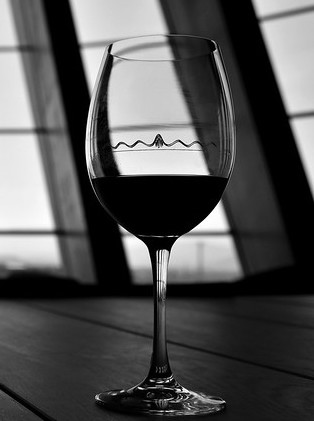 Red please: maybe a Rioja, a Primitivo or something equally gutsy. Strip away the almost 10,000 year of vinoculture and we see the substance, like many that follow, as predominantly a time-dissolver and a pain-killer. It is also a self-cure that takes us beyond “the two worlds” of oppositional valence, such as caring too deeply about something (stress), versus not caring at all (depression). Wine is good for either condition, and neither.

Ethanol, phenolics, tartaric and residual sugars work as a salve and an emollient for the jolts and jars of everyday trauma. What Siddhartha was perhaps referring to when he positioned dukkha as the central spoke of his first Noble Truth? This pali word is often translated abstractly as “suffering” or “discomfort”, but I’ve always liked the notion that its etymology can be traced back to the physicality of a painful, bumpy ride due to a poorly-fitting axle hole in the centre of a wagon wheel. Now imagine yourself sitting on that painfully bumpy wagon with a flagon of wine in your hand. And maybe some pistachio nuts. Better already, right?

One of my clients refers to this ride as her “rollercoaster”: those times when she feels overwhelmed by her suffering, not in the driver’s seat of her life any more. She often hits the bottle at these times – which usually makes matters worse for her, or anyone. Dukkha (discomfort, unease, emptiness) becomes sukkha (happiness, comfort, ease) whilst drinking. But we pay for it the following day. 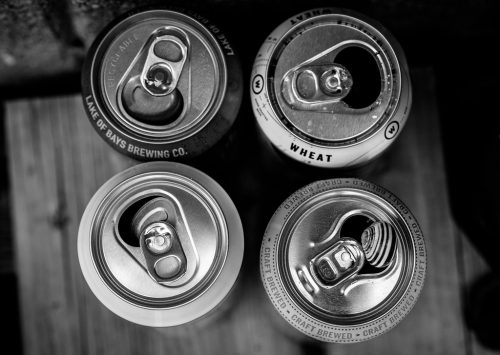 The part of London where I live became very Polish in the aughts and then Romanian in the last 5 – 10 years, so we are all now connoisseurs of the East-European beers that have rapidly taken over in price and quality the usual Stella-Carlsberg-Budweiser triumvirate to be found in all cornershops. The East-European snacks that are also sold alongside the beers are not particularly good though, tasting often of sawdust and poverty, but the beer from these ex-communist countries is fantastic: Timisoreana, Tyskie, Zywiec, Lech, and others.

Two cans (a litre) leaves me feeling woozy and hungry, but one can is never enough. Although when it comes to the “quick fixes”, does any small quantity of our drug of choice feel enough? Maybe this is the defining factor of a quick fix: when you get “enough” of it, you feel ill? Whereas a slow, or humdrum fix (learning a poem, going for a walk, gardening, meditation) can never be overdone. 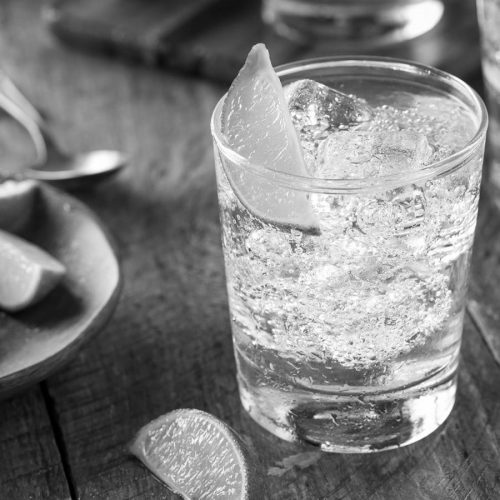 For the tonic water, can I have mine with the Schweppes Low Calorie Elderflower tonic water, please, and a hearty squirt of lime? Morrisons do a good, low-price gin, and another that has won awards. Both are nice neat, but as a mixer, the Morrisons cheapo gin is really quite delicious.

The market leader, Gordon’s, is quasi-undrinkable: metallic and medicinal-tasting, though no one seems to have clocked that yet. I find this surprising as the market-leader tonic water (Schweppes) is still head and shoulders above anything else. I presume that most people don’t actually taste their gin as it is predominantly used to alcholise the tonic. Sometimes I won’t stop at a few glasses of G&T as a pre-meal libation, but will switch at some point to gin on the rocks, drinking until I feel wobbly and sleepy.

The neuroscientist Judith Grisel in her book Never Enough explains how alcohol works on the mesolimbic pathways of the brain, producing not only a feeling of pleasure, but also possibility. Yes! That is what I’m hungering for when I pour myself a glass of wine, beer, or gin. Possibility! “The spreading wide my narrow Hands  / To gather Paradise – ” as Emily Dickinson puts it in her poem of that title.

Possibility is deliciously“promiscuous”: you could do this, or that, or the other. Cannabis provides this too, perhaps even more so. Other drugs however, writes Grisel, “typically interact in a very specific way with only a single neural substrate”.

With alcohol, “it’s hard to pin down how each of its chemical kisses contributes to the intoxicating effects we experience.” For this we need the poet’s analogy, of how a camel might feel “when its finally / been untied from its post and / gets to just amble about freely.”

We forget that feeling of pleasurable possibility the following day though when we’re once again tied to our posts, now with even more leaden stomachs and bleary eyes. But this will eventually dissipate, and once again, we will start scanning the horizon waiting for evening to fall. 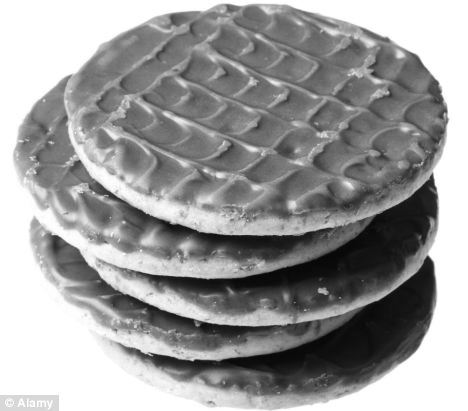 I eat fewer of these than I used to. I once had a half-a-packet-a-day chocolate digestives habit. Occasionally I’ll allow myself some fig rolls, or a small pack of shortbread which I’ll devour over the course of two days, but for the most part, I dreamily walk down the biscuit aisle in a state of self-denial. It is an enchanted kingdom that I rarely visit. If I want a biscuity snack, I’ll slather sugar-flavoured-fruit (jam) onto some crackers, or honey: that magical substance transmogrified through the digestive systems of bees. Floral vomit. Honey is bee vomit. You know that, right? 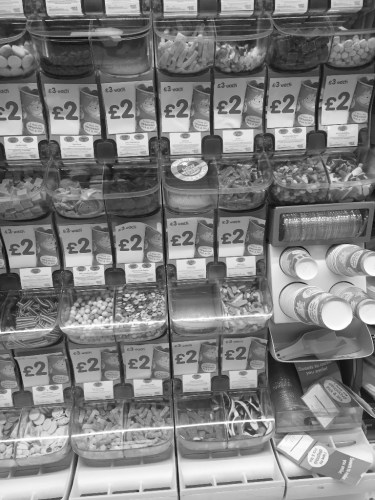 Even though I am a vegetarian and shudder at the idea (ethically, but also on a physical, disgust level) of eating a substance made from the mashed up bones of cattle then mixed with sugar and flavourings, I avoid that part of my brain when stealing from the pick-and-mix at the supermarket. To buy it would be to make official the fact that I am eating something that I morally and digestively abhor. It’s like the kosher-following Jew who only eats bacon when it’s hidden in some kind of bun and served to him by an anonymous, untraceable third party.

Sometimes I allow myself some chocolate. These are either portion-controlled, and apportioned out treatlets, like smarties or Cadbury’s buttons, or the smallest Toblerone I can find, the one that only has 150 calories. If I buy a large bar of something I really like (Lindt dark chocolate with sea salt) I will eat the whole thing in the course of 24 hours. 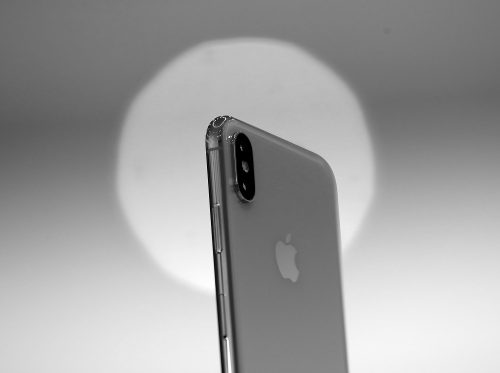 The love affair is more or less over. It works now as a memory-repository, an extension for my brain, and something to fidget with. Fairly often I will sit flicking between apps, just opening and closing them down, in the hope that something, or someone will say something interesting or engaging aimed directly at me. This happens fairly rarely, but then I don’t really say anything interesting and engaging directed at a specific individual myself either. So it’s not like I’m actively inviting this sort of social engagement. Sometimes though I broadcast a thought or an essay like this one into the river of social media, so as to hear myself speak, but also for fear of not having a voice. This is a sufficient salve for the former need, and insufficient for the latter. I don’t have enough followers to have a voice – about 10,000 seems to be the point where one starts being noticed and talked about, which nowadays means retweeted.

BUMBLE (or whatever dating app you are currently using) 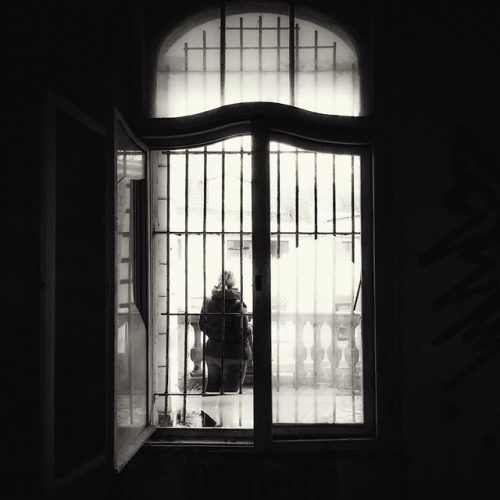 Saving me, you, from what? From the deprivation of a certain kind of intimacy -especially, but not only a certain kind of physical intimacy- as well as the narcissistic pleasure of having another human being take an interest in our lives either as a gesture of reciprocity or desire?

The reader of the poem can decide for themselves what those four urgent needs of the heart are. When it comes to intimate relations, I guess we are referring here to things like: sex, engaging conversation, care, and support. As human beings we’ve invented a single word that encompasses the promised fulfillment of all of these needs: love. More often than not the word love is used as a cover-all, when only one of the four urgent desires is sought (not only consciously). Or it is paid to another as a token indicating the satisfaction of all four desires, when only one or two have been satisfied. Or else it is used as a placeholder in the present for emotions that were felt in the past. Or it is not used at all.

Here’s the poet Sarah Wetzel on that dilemma:

A man I married told me one morning,
I don’t think I love you. We’d been married twelve years
though it took him another two years
to walk out the door. To be honest, I never loved him,
not even as I said yes. Yet I know, I’d still be with him
if he hadn’t left.

I google Wetzel after reading her poem on Borges which contains the above stanza. She seems very lovable. We will never meet.